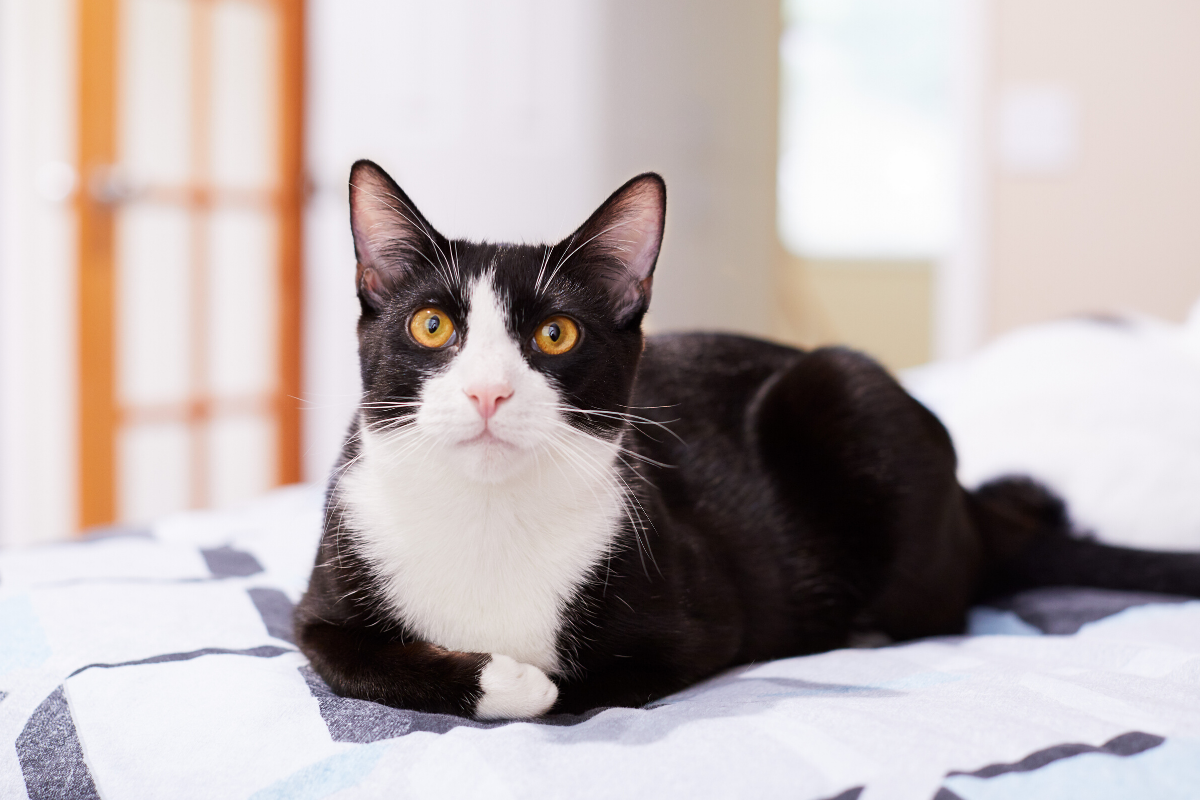 What are Tuxedo cats and are they a breed? In this post you’ll discover all about tuxedo cats and what makes them so special. These little bi-colour kitties are unique in many ways, and I’ve had the privilege of adopting one.

Keep reading as You’ll discover surprising facts about these adorable felines, and what makes them such characters. Firstly, tuxedo cats are not a breed but the result of a white spotting gene.

They’ve been around for thousands of years and many ancient tombs had drawings of these bi-coloured kitties. It’s a well known fact that cats were worshipped by ancient Egyptians, but you can only guess as to why a huge percentage depicted in their artwork are tuxedos.

Tuxedo cats are everywhere in pop culture. I’m sure you’ve seen Felix the cartoon cat, as well as Sylvester. Both are typical tuxedos with white paws and white bibs. In fact, they’re so popular many tv ads feature them as well.

In addition, well known historical figures including Shakespeare, Sir Isaac Newton, and Beethoven, all owned tuxedo cats. Maybe Beethoven’s pet kitty inspired some of his works:) It was Isaac Newton who invented the cat flap after he was looking for a way his feline companions could let themselves in and out whenever they wanted.

Modern cat flaps have microchips, keeping intruders out, as well as being lockable. They also come in a variety of sizes and designs. I’m sure Isaac Newton would be very impressed to see how his invention has developed over the years!

How did Tuxedo cats get their name?

The name originated from coat markings that resemble smart formal wear. True tuxedos have white socks and white bibs, with many also having white marks on the nose and mouth area.
Though tuxedos are known for their stark contrasting black and white markings, they can also be found in a variety of colours and breeds.

In addition, coats can be long, short, or semi-long. Breeds such as the British Shorthair, Turkish Angora, and Maine Coon have been found to have tuxedo markings. Also, these unique coat markings can be found in oriental breeds such as Siamese.

Though black and white is the most popular, other colours such as ginger or grey can feature in tuxedo markings. One sad fact though is black and white cats often spend longer in shelters waiting to be rehomed. One theory is it’s because they’re so common. Tuxedos aren’t the same as most black and white cats though, and if they don’t have white paws and a white chest they’re not a true tuxie.

You can’t help but fall in love with one of these cats when you look into those beautiful emerald green eyes. Most have either green, gold, or yellow eye colouring.

When I adopted my little tuxedo, It was my second visit to the rescue centre. I’d noted him down as my first choice out of three, and on my second visit a few days later the other two kitties had already been reserved. However, luckily for me, “Ivor” as the staff named him, was still waiting for a home:)

How do tuxedo kitties get their unique marking?

If you have the pleasure of being owned by one of these kitties you’ll soon discover how smart they are. Many tuxedo parents consider their fur babies to be one of the most intelligent cats. However, as we all know, parents tend to be a little biased! That being said, many really do show a high level of intelligence.

My cat soon realised he could train me to feed him everytime I walked into the kitchen! He learnt to circle me, making it impossible to ignore him! I’d either fall flat on my face or give him a few kitty treats:) Of course, I have to be mindful of the amount of treats he gets otherwise he’d be the size of house:)

If you want a loving and affectionate cat you need look no further as tuxedos are renowned for their friendly nature. They also have a reputation for their dog like habit of following their human family around the house. Privacy will be the thing of the past with a tuxedo!

In addition, they often get on well with other pets. So if you already have a dog or cat you may find your tuxie quickly fits in. Always take care when introducing a new pet though, and follow the guidelines.

Can you train a tuxedo cat?

You’ll find it fairly easy to train a tuxedo cat as they do seem capable of picking up things fast. However, if you’ve ever heard the phrase “dogs come when called, but cats take a message and get back to later” you’ll know a cat will only respond if it wants to! That being said, if you know the right techniques you can train most cats to obey simple commands. Read my article on “how to train your cat to fetch like a pro” to find out more.

Do tuxedo cats have any health issues?

Tuxedo cats are as robust and healthy as any other kitties and if looked after can live long lives. Most cats live between 14-18 years on average. However, with advancing medical science many now enjoy their golden years well into their 20s.

All felines are prone to kidney disease as they enter their senior years, so it’s important to get your cat checked annually by a vet as well as keep up with vaccinations.

Grooming your tuxie regularly can help spot potential problems before they develop. The same goes for any cat whether long haired or short haired. Always check ears for possible mites and feel along the body for any unusual lumps or bumps.

Where can you get a tuxedo cat?

You shouldn’t have far to look for a tuxedo cat waiting to be rehomed. They’re not a special breed and won’t cost you much. Most shelters will charge for neutering as well as microchipping. Mine charged £60 and even gave me a pet carrier as well!

In addition, kittens are always the first to be adopted, so don’t overlook adult cats. Mine was thought to be about two years old and very playful. I named him Alfie and he’s a great companion.

Cats are considered one of the most magical animals on earth able to protect you from negative energy. In addition, they can also bring positive energy into the home and even attract prosperity!

10 thoughts on “What Are Tuxedo Cats?”