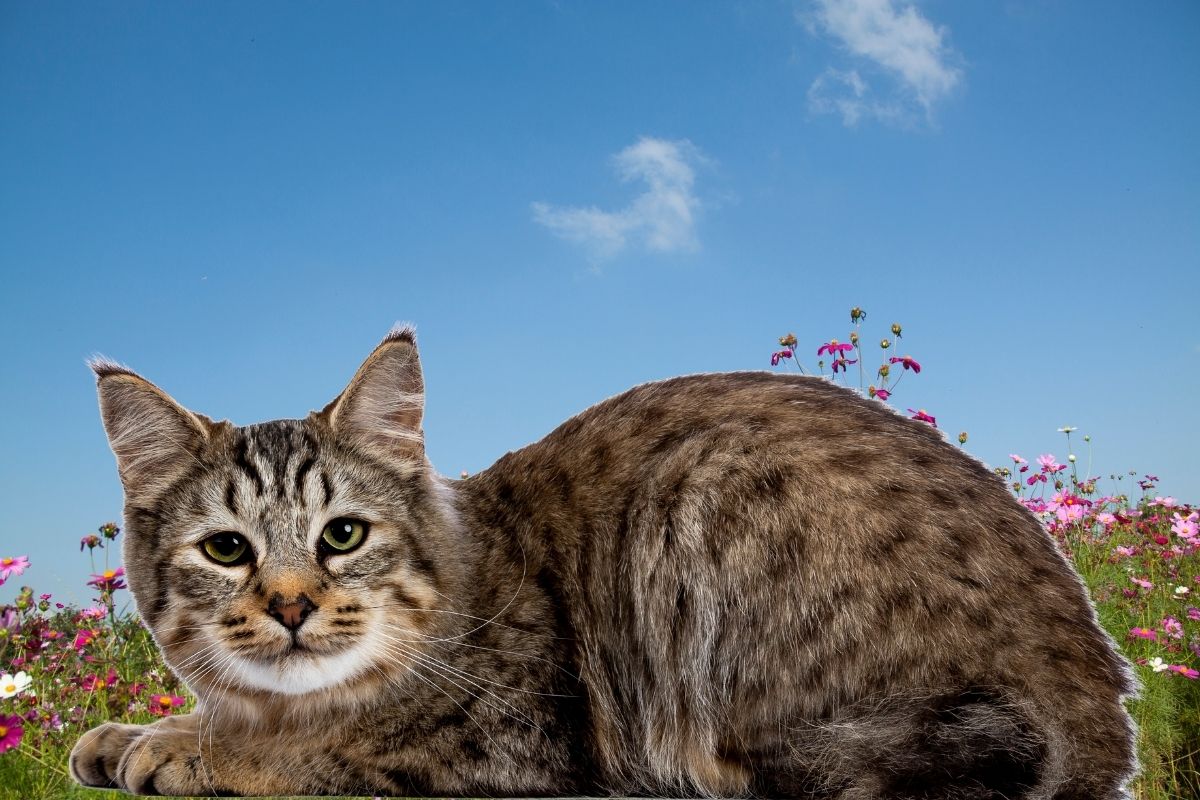 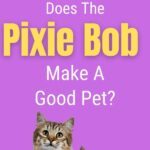 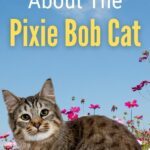 If you’ve heard about the Pixie Bob cat and wanted to find out more, this article will provide all you need to know. Whether you want to adopt a bob cat or just love cats you’ll enjoy this post..

Keep reading as we cover a brief history of the Pixie Bob cat and how the breed was born. In addition, you’ll learn all about this cat’s personality and if it lives up to its wild looks.

Plus, if you want to adopt a Pixie Bob you’ll want to know if there are any health issues. We’ll cover this as well, including tips on care and grooming.

Lastly, we’ll look at finding a breeder and what you need to look for. This is a very important topic and needs careful thought.

You may be surprised to learn Pixie Bob cats have no wild cat genes. In fact, they’re wholly domestic with no wild streak at all!

It all started after Carol Ann Brewer bought a male kitten with polydactyl toes. Then a year later in 1986 she took in a large male cat she named Keba.

Even though the poor thing was in a terrible emaciated state he still managed to escape and mate with next doors cat! While the female was a spotted domestic tabby, Keba was a large short tailed kitty.

As a result, one of the kittens had a wild appearance with a reddish-fawn coat. Carol was so taken with it she decided to keep this female and named her Pixie.

This little kitty was the very first Pixie Bob and foundation of the breed. As Keba was believed to have wildcat genes it was also assumed his offspring would as well.

However, after DNA testing no trace of any wildcat was found in either Keba or his offspring. It was therefore established that this new breed was totally domestic.

Realising how distinct and wild looking Pixie appeared, Carol decided to try and recreate this unusual look. She did this by introducing 23 cats into a breeding program which also included the polydactyl male.

The 23 cats originated from the Cascade mountain range in Washington and believed to be the result of mating between domestic cats and wild bobcats.

Then, a few other breeders took an interest in Carol’s breeding program and were really taken with the Pixie bob. They were working with barn cats at that time with a distinctly wild appearance.

The Pixie Bob cat was finally recognised by the TICA in 1995, and in 1997 gained championship status. Today it’s become a popular breed in America, but fairly rare in Europe.

If you were to look at a Pixie Bob, apart from its wild appearance you’d notice just how large this cat is. In fact males can weigh up to 25 pounds.

That’s a lot of cat! Females are smaller, though both males and females can grow up to 13 inches tall! That’s taller than an average domestic kitty.

Tails can vary from non-existent to full size. However, show standards require a tail to be at least 2-4 inches in length.

Pixie Bob cats can be polydactyl While many have the usual 5 toes on front paws and 4 on hind paws, some exhibit extra toes.

This fairly unusual trait is inherited from the polydactyl male used in Carol’s breeding program. While many are completely normal you may occasionally comes across an extra toed kitty.

As Pixie Bob cats have very large feet, there’s plenty of room for all those extra toes. In fact some have been found to have as many as 28!

Interestingly, this is the only breed allowed to have extra toes for show purpose. In fact a polydactyl Pixie is allowed a maximum of 7 toes on a paw.

Taking a close look and you’ll notice it has a double coat. In addition the coat is wooly and thick in texture.

Actually, you can find both short and medium length varieties. However, as the coat never grows more than a few inches long, you won’t find long haired Pixie Bobs. This does make for easier grooming though.

Also, you won’t find a wide variety of coat colors and patterns. In fact, the most common is a tawny-red with dark grey or black stripes.

In addition, a pattern of small rosettes or spots are also found as well. This could have you thinking you’d spotted a wildcat if it’s the first time you’d seen a Pixie Bob!

Some can be found to have classic tabby markings with an M shape on the forehead. As outbreeding is used a lot, you will typically find these variations.

Another unique characteristic you’ll discover is black skin on the underside of their paws as well as black hair.

Black skin can also be found on the chin, mouth, and around the eyes. In addition, you’d notice these are topped with white fur.

The head is often referred to as being pear shaped, and downward growing muttonchops exaggerate this. Also you’ll notice the ears have quite a lot of hair with some showing lynx points.

You’ll definitely fall in love with cute muttonchops often found around the jowls. Also, you may notice what looks like a lion’s ruff around the neck. This is only found in shorthair Pixies though.

Eye coloring varies from gold to gooseberry green, though all kittens are born with blue eyes. In addition, the eyes are a medium size with heavy brow.

Even though they resemble wild bobcats, Pixie Bobs certainty don’t have any wild streak. In fact, they have a gentle nature that’s very dog-like.

If you’re looking for a breed that’s sociable and enjoys being around other pets, the Pixie Bob is a good choice. Whether you have other cats or dogs, you’ll usually find a Pixie will fit in well.

This is a highly intelligent cat that can easily be trained. From playing fetch to walking on a leash, their ability to learn fast makes this fun.

An active breed, the Pixie Bob needs plenty of exercise and mental stimulation. If you want your cat to have the enriched life she deserves, outdoor access is the best option.

However, if you’re near a busy road you could always build a cat run or catio. This would at least provide enrichment with sounds and smells of the outside world.

Although this breed doesn’t have a loud voice it’s known for making chirping and chattering sounds. You may also find Pixie Bobs don’t meow very often unlike most domestic cats.

This isn’t to say that you can’t have interesting conversations! You’ll still get a response and I’m sure you won’t be allowed to forget mealtimes!

Caring For Your Pixie

If you decide to adopt a Pixie Bob you’ll be pleased to hear they’re quite easy to care for. However, you’ll need to allow time for a weekly grooming session.

This is to make sure its thick, double coat doesn’t get matted. Also, though not heavy shedders, all cats molt during the changing seasons.

The best type of brush is a slicker as it’s good for removing dead hair from dense undercoats. Also, invest in a comb as they’re good for smoothing the coat after grooming.

Keeping your cat’s nails trimmed is important unless you want shredded furniture! While a nail trimmer is a good tool to have, you need to know how to use it properly.

The best nail trimmer is either a scratching post or tree bark. If your cat doesn’t go outside, I’d recommend a cat tree. This will provide her with plenty of places to jump, play and rest.

In addition, most have sisal covered poles giving every opportunity for your Pixie Bob to sharpen her claws. Placing it near a window gives your cat mental stimulation as she views the world outside.

Is This A Healthy Cat Breed?

Unlike many thoroughbreds, the Pixie Bob cat has no specific health problems. This is because they’re frequently out-crossed.

Inbreeding can be the cause of many inherited diseases and defects. This is why some breeds such as Persians develop extreme features such as flat faces and jaw misalignment.

However, there are a few conditions found in some including dystocia. This makes giving birth difficult for females.

If you intend to buy a Pixie Bob female for breeding you may want to look into this. Also, some males have had missing testes.

Despite those minor concerns the breed is considered robust and healthy. In fact you can expect a healthy cat to survive into her mid teens or older.

Is The Pixie Bob The Right Breed For You?

As you’ve learnt, this breed is very active and sociable. If you’re thinking of getting one of these cats it may be best to get two.

This means they’ll always have each other for company when you’re out. Also, if you are out at work all day make sure you leave plenty of toys.

If you have children as long as they’re not very young you should be ok. Though not recommended as the most child friendly of cat breeds providing you teach your children to behave responsibly you should have no problems.

All animals whether child friendly or not are unpredictable. An over enthusiastic or excited child could get a nasty scratch or bite.

Before you start looking for a particular breed of cat do plenty of research first. Finding a local breeder for a desired breed isn’t always easy.

In fact you may need to travel quite a distance. One of the best places to start is the TICA breed listing.

Look online for Pixie Bob cat breeders but before you put your hand in your pocket, or visit any premises, pick up the phone.

Talk to the breeder and ask plenty of questions. A good breeder will be knowledgeable and enthusiastic.

You can often tell by a person’s tone of voice if they’re genuine. If you’re not allowed to see mother or kittens don’t take it any further.

Premises should be clean and spotless. Also, you should be able to see certificates if you’re buying a pedigree.

Take your time and ask about the kitten’s parentage. If you get any bad feeling walk away.

I hope this article about the Pixie Bob cat has answered many of your questions. As you’ve discovered this is a wholly domestic cat but with wildcat looks.

As this breed has been created with outbreeding there are no specific inherited diseases. Also, its loyal, dog-like nature makes the Pixie a great companion.

However, if you adopt this cat you’ll need to provide plenty of stimulation. Failing to do so could result in a frustrated kitty and clawed furniture!

One thing I forgot to mention is their water resistant coats. This indicates a love of water, so if you get a Pixie don’t be surprised if she tries to join you in the bath!

8 thoughts on “Amazing Facts About The Pixie Bob Cat”