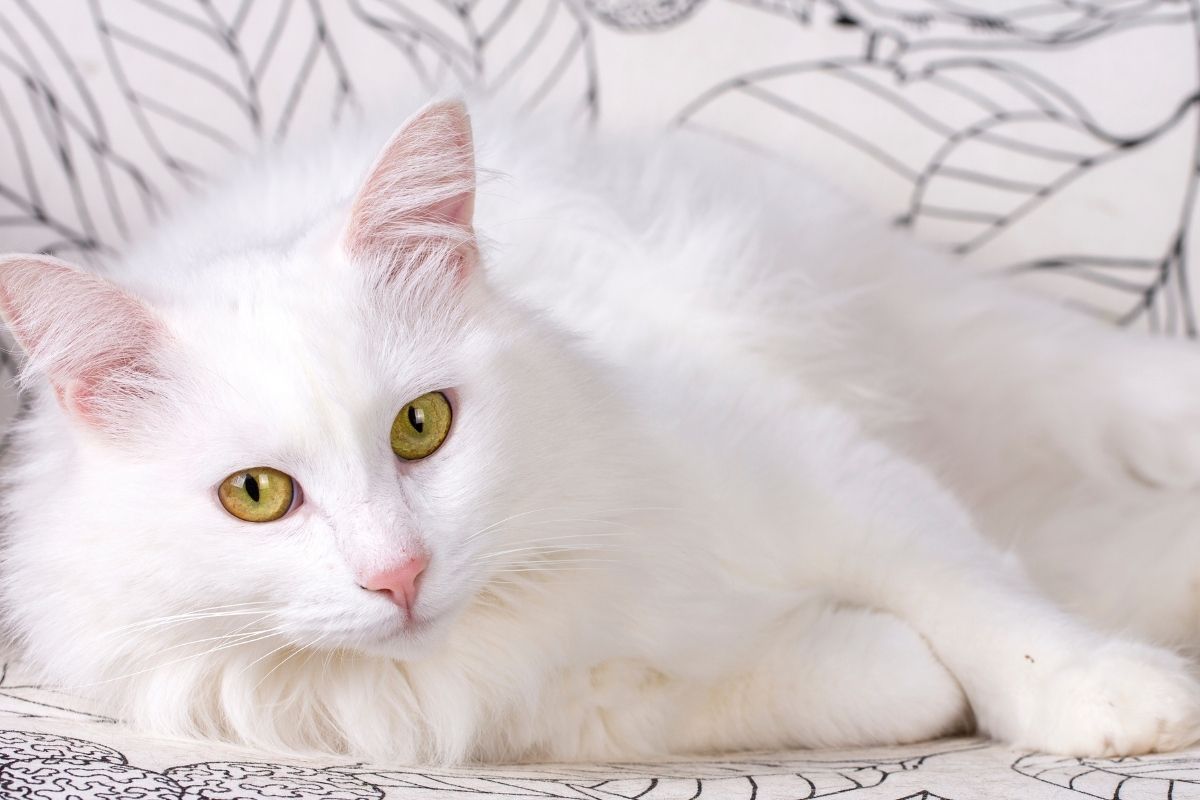 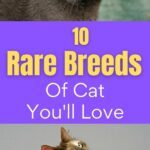 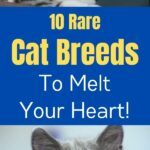 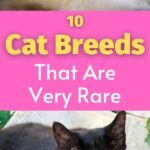 As an enthusiastic cat lover you may be keen to find the more unusual breed to adopt. In this post you’ll discover 10 rare cat breeds you may not have heard of, but will certainly melt your heart.

Each of the following breeds have their own unique characteristics that set them apart from the rest. Whether you’re looking for a cuddly lap cat, or one that’s more independent, you’ll find plenty to inspire you here.

Some of these cat breeds are rarer than others making them challenging to find. However, with patience and a bit of luck you may be able to track down your purrfect kitty!

The American Wirehair cat breed is quite rare but increasing in popularity. As it’s still a new breed you may find it very hard to come across one.

Originating in New York, it’s very similar to the American Shorthair. It all began after two kittens from the same litter were found to have wiry coats.

A local breeder bought them and managed to replicate the cat’s coarse texture. You need to be aware though that American Wirehair cats have strong hunting instincts.

This is because they originate from farm cats. You see, the kittens with this rare mutation were discovered in a farm in Upstate New York.

If you let this breed of cat outside it’s often a good idea to fit a collar and bell. Typically, American Wirehire cats will enjoy hunting small birds and rodents.

Though, most cats enjoy a hunt, this particular breed seem to have a stronger hunting instinct than your average moggy. Be Mindful of this if you have other small pets such as birds or mice.

You’ll find American Wirehair coat color and patterns vary widely. Also, the coarseness of the coat varies as well. While some may have a complete covering of tough wiry hair, others may have a softer texture. In addition, whiskers may be wiry as well.

The Korat cat breed originates from Thailand and looks very similar to the Russian Blue. The main difference though, is while Russian Blues have thick double coats, Korats have single coats with a soft velvety texture.

Korats are said to bring good fortune, and a Traditional Thai bridal gift used to be a pair of Korat cats. This was supposed to bestow good fortune and fertility on the newlyweds.

You’ll find the Korat cat breed is only available as silver blue. In fact, on their arrival in Britain during the nineteenth century they were mistaken for Blue Siamese.

If you live in America you’ll find the Korat cat a rarity. This is due to its small gene pool. However, if you’re lucky enough to track down one of these kitties, expect to pay a high price.

In fact, you could be paying on average between $600-800 for a kitten. Though not one of the most expensive cat breeds, they can still demand a good price.

Though you may associate Angora with soft, hand knitted sweaters, the name is also given to a rare breed of cat. In fact Turkish Angoras originate from Ankara in Turkey.

It’s believed this breed were introduced by Vikings thousands of years ago. However, a serious decline in numbers made them a scarcity.

It’s thanks to a breeding program originated by Ankara zoo that numbers have been increasing. Though still quite rare you should be able to find Turkish Angoras for adoption.

In appearance, this breed has a beautiful long silky coat and wedge shaped head. In addition, the body is long and muscular with small dainty paws.

Although white is the most common color you’d associate with Turkish Angora cats, you can also find other coat colors and patterns as well.

If you decide to adopt one of these beautiful cats, you’ll find it to be athletic, intelligent and very sociable. In fact, if you have the funds, getting two kittens is the best option.

Chartreaux are a rare breed of cat that originated in France with its history dating back hundreds of years. It’s believed these cats were bred in monasteries to kill rodents and keep the numbers of pests down.

Sadly ,the breed decreased in numbers to the point of extinction after unscrupulous furriers sought them for their beautiful coats.

You’ll be pleased to hear the Chartreaux breed survived and has been developed into one that’s recognized by breeders and enthusiasts worldwide.

If you were to look at a Chartreaux cat you’d soon fall in love with it’s cute smiley face and luxurious blue-grey coat. In addition, if you like cats that aren’t too demanding and happy playing on their own, this could be a good breed for you.

Despite their increase in numbers, Chartreux are still quite rare. If you want to buy one of these adorable kitties expect to pay anywhere between $500-$2,000. You’ll find those considered top pedigree at the high end, but if you’re NOT buying a cat for show purposes, perfection shouldn’t matter!

You may be forgiven for not knowing about the Havana cat breed as it’s so rare. In fact there are only around 1,000 of these cats in North America.

The Havana Brown actually originates from England, and not Havana! Actually, you’ll be interested to learn, the breed was named after Havana cigars due to it’s deep rich brown color.

In fact, the name caused much confusion when it was registered as it was thought Havana Brown cats must have originated from Cuba!

As you can imagine, their rarity makes it hard to find a Havana Brown cat. As a result, you can expect to pay anywhere from $800-$1500 depending on the breeder.

If you’re looking for a rare cat breed, the Kurilian is a real gem. With only around 100 to be found in North America, you can understand why!

As the Kurilian is a naturally evolved breed it’s generally healthy, with no known genetic health problems. So if you’re looking for a breed that’s robust this could be a good option.

Kurilian Bobtail cats originate from the Russian Island of Sakhalin and Kuril archipelago. You’ll be fascinated to learn that just like the Turkish Van, these cats love water!

Whether you’re looking for a short or semi-long haired kitty, you’ll have the option of either with a Kurilian Bobtail. Of course, this is if you’re lucky enough to find a breeder.

If you live in Europe however, you’ll have a higher chance of finding this breed. This is because they’re better known, especially in Russia.

Don’t expect a Kurilian to spend her days sleeping. These cats are high energy and love hunting. However, you’ll also find a Kurilian kitty loves nothing better than cuddling with her favourite humans!

If you decide to buy a Kurilian Bobtail cat you can expect to pay between $700-$3,000. However, this does depend on where you live and the breeder.

If you came across a Serengeti you’d feel you were in the company of a miniature wild cat. In actual fact this is a mixed cat breed.

Serengeti cats are a cross between a Bengal and Oriental Shorthair. However, if you’re concerned about the breed having Serval blood you’ll be pleased to hear it doesn’t.

The founder of the Serengeti was aiming to create a cat similar in appearance to the Serval but without any wildcat genes. The result was a breed that has the large ears of a wildcat, and markings that vary from tabby to rosettes similar to the Bengal

If you want a cat that’s outgoing and friendly with a hint of wildcat this could be a good choice. However, you’ll need to budget anywhere from $600-$2000.

LaPerm is still a fairly new breed and not one that’s commonly found. If you were to come across one of these curly kitties you’d be forgiven for thinking it’s had a bad hair day or disastrous 80s perm!

In actual fact, the breed was the result of a natural mutation and not as you may have thought, the result of some weird experiment!

An outgoing, comical and friendly cat, LaPerm is well suited to families with children or other pets. Like most other rare cat breeds they come with a higher price.

If you decide you’d love one of these curly cats you could expect to pay anywhere in the region of between $900-$1500. As previously mentioned, always do plenty of research first before making any decisions.

Sokoke are believed to be the rarest domestic cat in the world. So, it’s not surprising if you’ve never heard of the breed.

Sokoke cats originate from Kenya and it’s thought there are only around 30 registered with the GCCF. In addition, there are very few in North America, so finding one these kitties may be challenging.

This is a medium size cat with short fur, and markings that resemble tree bark. If you decide to get a Sokoke, be prepared for an energetic and outgoing housemate!

If you have children or other pets this breed would fit in well as they have a sociable and friendly nature. As previously mentioned, Sokoke are extremely rare so you’d need patience should you decide to get one.

If you’re looking for a rare an exotic looking breed of cat then the Minskin may be for you. Originating from Boston, the Minskin is a mix of Sphynx, Munchkin, and Devon Rex.

Minskin cats can be found in a variety of coat colors and patterns including tortoiseshell, tabby, and colorpoint. You’ll be pleased to hear this is a low maintenance breed that’s outgoing and playful.

I hope this list of rare cat breeds has inspired you. Whether you’re looking for a more unusual breed of cat to add to your fur family, or just curious, I hope I’ve helped.

While there are hundreds of registered dog breeds in the world, there are surprisingly few cat breeds. In fact Encyclopedia Britannica only list 15 different breeds, while The International Cat Association, list around 71 varieties.

New breeds are being created all the time though, and some may not have been officially registered. In addition, many rescue cats may have pedigree ancestors.

Always make sure you do plenty of research into a breed before making a final decision. In fact, a good idea is to find clubs or organisations with a particular interest in that breed.

You may also find members able to put you in touch with reputable breeders as well as share their knowledge. When it comes to finding your purrfect companion, the more time you take the better.