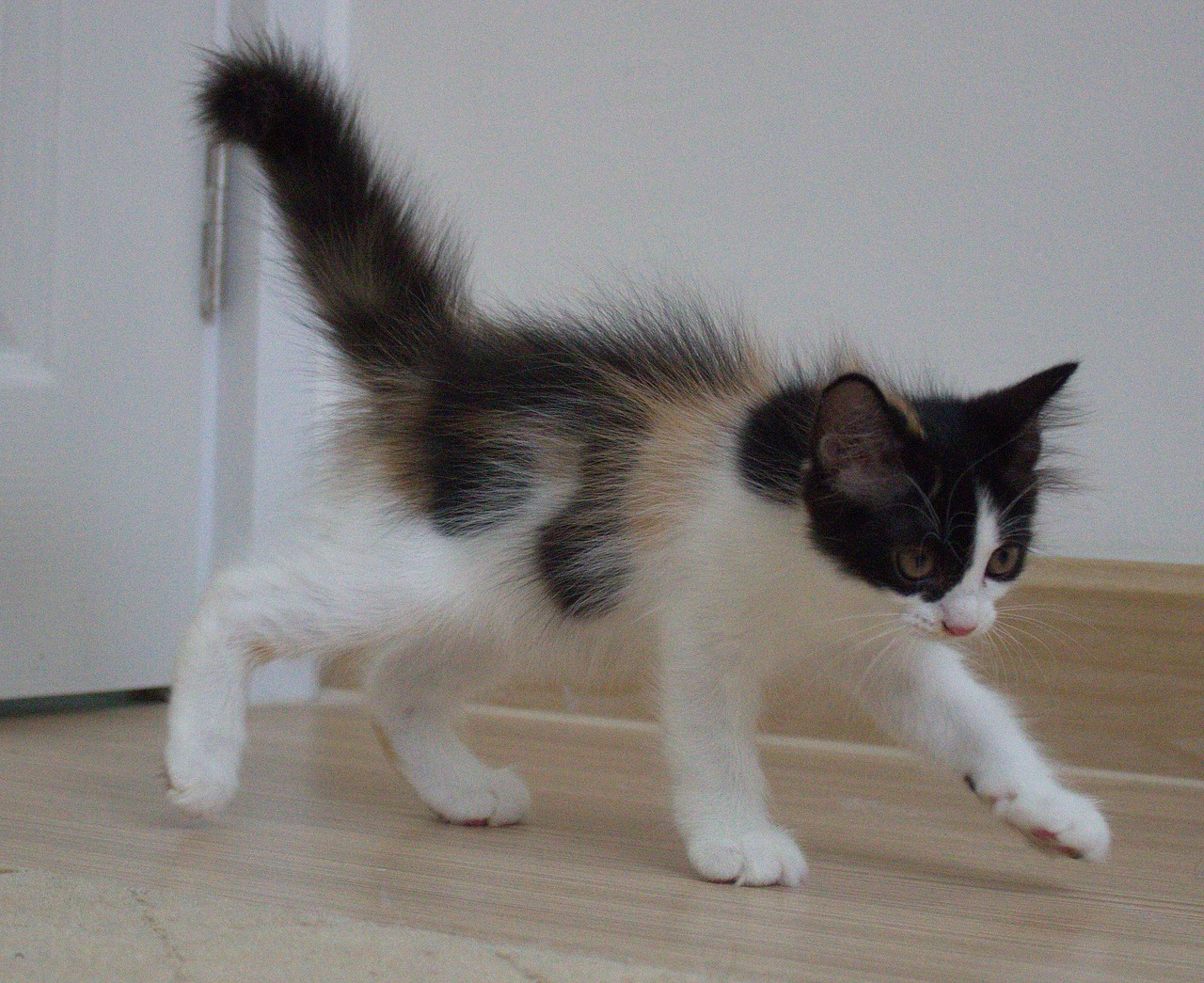 Neurological problems with cats are not uncommon, especially as they get older. In this post we’ll take a look at some of the more common neurological disorders your cat may develop. Plus, signs to look out for and when to take your cat to the vet.

We’ll cover seizures in older cats, epilepsy, brain tumors and strokes. Many of you may be surprised to learn your fur baby can develop similar neurological problems to us humans. You’ll also discover possible treatments your vet may suggest. In many cases modern vetinary medicine can provide effective ways to manage your cat’s condition.

Your cat’s amazing brain and why it’s similar to ours!

Your cat has a truly amazing brain inside her small fuzzy head. It’s capable of storing 1,000 times more data than an ipad, and operates a million times faster!! It’s been found that cats and humans have a very similar brain structure with each region connected in identical ways. In fact your cat’s brain structure is 90% similar to yours!

It’s no wonder that cats are at risk of develop similar brain disorders. Your cat’s brain is composed of white and grey matter just the same as a human, as well as short and long term memory function.

How to know if your elderly cat has dementia

Humans aren’t the only species to suffer dementia in old age. Just as people are living longer so are cats. Modern medicine and better health care means your kitty could live into her twenties. Bearing in mind 20 is nearly 100 in human years you can understand the risk of dementia.

Dementia in cats is known as cognitive dysfunction syndrome and is very similar to that seen in old people. There’s very little you can do, apart from giving lots of cuddles. However, there are supplements available for pets that support brain function. You’d need to start giving these to your cat well before her senior years though.

Behavioral changes associated with dementia in cats can also result from other diseases such as diabetes, kidney failure and hyperthyroidism. It’s therefore vital you take your cat to the vet if you start to notice odd or eccentric behavior.

Changes in your cat’s behavior can be very gradual. They’re also masters at hiding discomfort making it even harder to spot problems. If you notice any of the following signs you need to get your kitty checked out as soon as possible.

This can include forgetting where the litter tray and food bowls are, or getting stuck in corners of the house. My previous cat reached a very ripe old age of 20, but suffered confusion in her final days. I’d often find her sitting in corners just staring blankly at the wall.

If you find your cat acting in this strange manor take it as a warning sign. You may think she’s just resting in an odd place at first, but if this becomes a regular thing you can be certain it’s more serious.

Some cats are naturally vocal, but an increase in vocalisation may indicate a neurological problem such as dementia. Crying at night could mean your kitty wants reassurance and feels disorientated.

Soiling in inappropriate places such as the bed or outside the litter tray could mean your cat feels confused. As I previously mentioned forgetfulness can be a sign of cognitive dysfunction.

Notable changes in your cat’s behavior

If your kitty shows a change in behavior it may be something’s upset her, or it could be a more worrying issue. The best idea is to keep an eye on her and see if it continues. Aggressiveness towards other pets or family members is upsetting to see. Your cat doesn’t realise what’s going on, in exactly the same way as a human suffering from dementia.

If you notice your cat is sleeping a lot less, and wandering aimlessly, this may be a sign of cognitive dysfunction or dementia. Reduced activity and avoiding social interaction are also signs to be noted. Sleeping a lot more than usual may also be cause for concern.

Can dementia be cured?

Sadly, there’s no cure for either humans or cats yet. However, there are drugs available that may help manage the condition. Keeping your cat comfortable and safe is about all you can do. Supplements as I mentioned may help your kitty, but once dementia becomes advanced there is little hope.

Watching your cat suffer a seizure is very distressing. You feel helpless and a feeling of panic washes over you. However, as scary as it looks, your cat will probably recover very fast. A seizure is simply a result of abnormal activity in the brain.

How do I know if my cat is having a seizure?

Typically, a cat will collapse on the floor and go very stiff. It will make jerky, uncontrolled muscle movements which could last up to 5 minutes. Seizures are typically seen more in older cats, just as in elderly humans.

What can I do to help my cat?

Your cat will be unconscious while having a seizure so be very careful handling her. Move her to a safe place away from obstacles such as furniture. If you have any other pets in your household, keep them out of the way. It may upset them and you want your cat to recover in a calm, private space.

What causes seizures in cats?

The most common cause of seizures is brain damage. This is most often the result of a stroke. It’s exactly the same in people, and in some cases may trigger further episodes. While seizures are quite rare in cats, they can be controlled with medication.

As long as your cat’s seizure lasts under 5 minutes and is a one off event, she may not need any further treatment. Your vet will want to determine the cause though, so expect a few tests including blood and ct scan.

Signs your cat may have had a stroke

While strokes are fairly uncommon in cats, better diagnostic tools are able to determine them. You’d soon notice a person having a stroke as you’d typically see their mouth droop to one side. In cats however,it’s slightly different. Some of the following signs may indicate a stroke, and if you notice any you should see your vet as soon as possible.

What causes a stroke in cats?

Causes of strokes in cats are very similar to strokes found in people. High blood pressure, and heart disease being the most common. Brain cancer and liver disease are other possible causes. There are two types of stroke. Ischemic and hemorrhagic. The first is caused by a blood clot, and the second or hemorrhagic is the result of a burst blood vessel.

One thing worth noting is cats often make far better recoveries from a stroke than people. Your cat may look in bad shape but give it a few weeks and your kitty will likely have made a full recovery. In some cases permanent brain damage can result in seizures. Don’t panic as they can be managed. A small number of cats don’t get better, and if your cat is very elderly and frail, recovery may not be as good.

How common are brain tumors in cats and can they be treated?

Fortunately, brain tumors are fairly rare in cats, but they do occur. Treatments can and do work in many cases, so it’s vital to get your cat checked by a vet if you notice any of the following signs;

Your vet will do a series of tests to determine the problem including x rays, blood, and mri. Depending on the age of your cat and her general health, surgery may be the ideal option. Chemotherapy may also be included in treatment.

You never know when your cat will get sick as illness can occur at any age. It’s always good to have peace of mind by insuring your pet. Vet bills can be astronomical, especially with conditions such as brain tumors and cancer.

Can supplements protect your cat’s brain?

As you’ve discovered, your cat’s brain is very similar to yours in many ways. Ensuring your kitty gets a diet high in antioxidants may help prevent many illnesses and support brain function. This is why you should avoid cheap bargain brand cat foods. Some may lack essential nutrients your kitty needs, including taurine.

Mauna koa naturals multivitamin supplement contains a broad range of vitamins and minerals, and is advertised as supporting total health. Vitamin supplements aren’t a miracle cure, and can take up to 3 months for any effects to show. Always ask your vets advice if you’re unsure about supplementing your pet’s diet.

Mauna koa nuturals can be mixed in with your kitty’s food making it easy to give. We all know how hard it is to give your cat pills! Though it has a 4.5 star rating, all the reviewers are dog owners. However, it is advertised as being suitable for both cats and dogs.

Are neurological problems with cats treatable?

As you’ve discovered, there are quite a few neurological problems cats can suffer from. If your cat is in her senior years she is at greater risk of developing health problems. It’s exactly the same with elderly people. All the problems we’ve covered in this post can be managed in most cases. Brain tumors may be curable with surgery, but this all depends on the size, and if your cat is strong enough to endure treatment.

If you’ve experienced neurological problems with cats I’d love to hear about them. I know how heartbreaking it is to lose a cat as a result of them. In a very old cat it’s often a combination of several health problems with brain disorder being just one of them.

Please feel free to leave your comments below.

22 thoughts on “Neurological Problems With Cats (Symptoms And Treatments)”