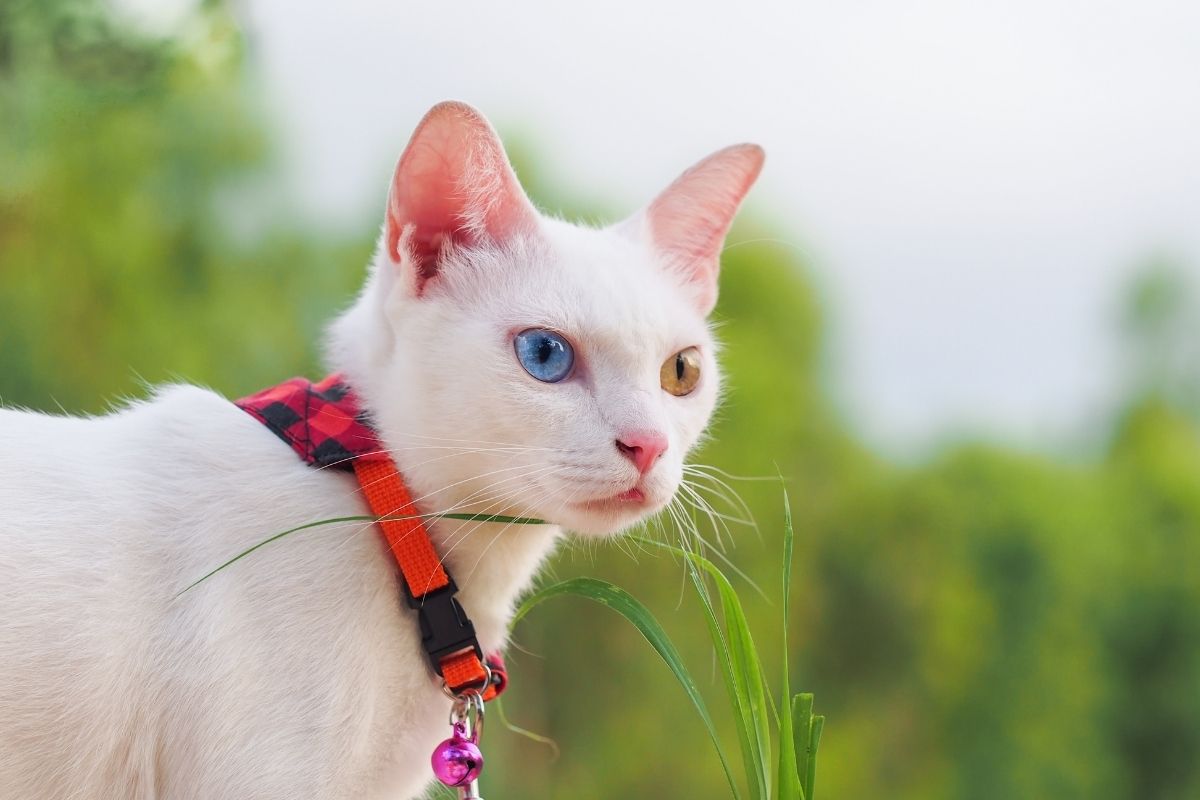 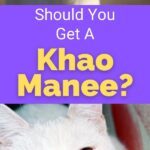 If you’ve heard about the Khao Manee cat and want to know more you’ve come to the right place. You’ll discover everything you need to know about this rare breed of cat including history, personality and lots more.

You’ll also discover physical characteristics, and if there are any health issues you should know about. In addition, you’ll learn about caring for your Khao Manee and finding a breeder.

Whether you’re just curious about the breed or thinking of adopting one I hope I answer your questions. There are far fewer breeds of cat than there are of dogs, and some like the Khao Manee are very rare.

Origin Of The Khao Manee

This rare breed has its origins in Thailand dating back hundreds of years. In fact, only until recently Royalty were the sole owners.

Thais believe they bring good luck and anyone who owns one of these cats will have good fortune bestowed on them. In fact, this breed have been a well kept secret.

The earliest written mention of Khao Manee can be traced back to the fourteenth century. This was found in a book of poems about cats known as Tamra Maew.

As this is a naturally occurring breed there will be no genetic defects. Some pedigree cats such as Persians are prone to health problems caused by inbreeding

It wasn’t until 1999 that a cat enthusiast named Colleen Freymuth imported a female Khao Manee into the United States. She named her Sripia, and after much interest imported a male as well.

The resulting litter were the very first to be bred outside of Thailand. Then, a few years later in 2004 a breeder named Janet Poulson imported the very first Khao Manee into the UK.

As interest in the breed continues to grow, numbers of cats imported are increasing. Though still rare outside of Thailand it’s hoped this will change over time.

What Are The Physical Characteristics Of The Breed?

The Khao Manee is a striking looking cat with pure white fur and large, vibrant colored eyes. This why they’re also known as diamond eye cats.

Eye color can be green, gold or blue or odd. In fact, those with odd color eyes are fairly common and popular among enthusiasts.

The head is wedge shaped, and ears are medium to large in size. In addition, the legs are long with oval shaped paws.

If you look at the Khao Manee body you’ll notice it has an athletic and muscular appearance. Also, the tail is broad at the base with a rounded tip.

If you’re looking for a long haired cat you’ll be disappointed as all Khao Manee are short haired. However, their fur is luxuriously soft and quite dense.

You won’t a Khao Manee in any other color apart from white, however you may find the occasional kitten with a dark marking on the head.

This isn’t permanent and usually disappears by the time the cat is one year old. If you have a cat you believe could be a Khao Manee look for any makings or spots of a different color.

Any markings no matter how small on an adult over 18 months old means your cat is not a Khao Manee. It’s possible you have a kitty that resembles the breed in some way though.

This is a medium size breed with weight varying from 8 to 11 pounds. Males can be slightly heavier though, with females weighing between 6 to 8 pounds

If you’re looking for a sociable cat that loves to be center of attention then this could be the right breed for you. Khao Manees are mischievous and highly inquisitive as well as being very sociable.

Be prepared for a high energy feline with a love of interactive games. In fact, you’ll find your Khao manee plays most of the day and sleeps well at night.

These cats are highly intelligent and easy to train. You may even be able to teach your Khao Manee to fetch. This makes them one of a small number of cat breeds that act like dogs.

You may also find this breed to be talkative with a loud meow! In fact you may end up having interesting conversations with your kitty!

If you have other pets you’ll find Khao Manees will get along just fine. I fact, like people, they gravitate towards those with similar personalities.

Households with canine family members needn’t worry as these cats usually enjoy playing with dogs. Don’t be surprised to find your Khao Manee joining in their games.

One thing you need to be aware of is this breed doesn’t like being alone for long periods. If you’re at at work all day you may want to consider getting two to keep each other company.

Although they’re playful and high energy, Khao Mannees also make great lap cats. Despite the loud meow you can expect a calm, and relaxed cat.

Make sure though you give your kitty plenty of toys to help burn off all that energy! Invest in a cat tree with plenty of perches to climb and explore.

This will not only relieve boredom but encourage exercise as well. Also, get a few interactive toys your cat can play with on her own.

Caring For Your Khao Manee

Despite their high energy and sociable nature, Khao Manees are not high maintenance. Their short coat is easy to care for with brushing once a week at most.

In fact, if you want to give added shine, gently rub the coat with a chamois cloth. You’ll also find shedding is minimal so less vacuuming up cat hair!

These cats do require a lot of attention though, and will meow loudly if ignored! Providing you allow time for play and cuddles you should be fine.

As with all other cats you must keep up with vaccinations and annual health checks. In addition, regular worming and flea treatments are also advised.

Does This Breed Have Health Issues?

As Khao Manees are a naturally evolving breed they’re generally healthy. However, blue eyed manees are prone to deafness.

It’s widely known that pure white cats with blue eyes can become deaf. Though not always the case it’s something you should be aware of.

In addition, skin cancer can be a problem with white cats. The ears especially are prone to cancerous growths and should be protected from the sun.

My previous cat was pure white and always remember the vet suggesting I put sun cream on her ears. Sadly, she still developed a growth on one of her ears though.

I believe I didn’t realize the strength of the sun here in the UK. I also now realize UV light can penetrate through clouds.

How Much Do Khao Manees cost To Buy?

If you’re thinking of getting a Khao Manee you need to be prepared to spend between $5,000-$10,000 on a kitten. This is because of their rarity and import duties.

However, you’d have a wonderful companion who’d be devoted to you and your family. I’d say if you have the money in the bank and desire one of these beautiful cats don’t hesitate.

Providing you have the time to give your cat the care and attention she needs you could be sharing the next 10-12 years with a loving pet.

That’s the average lifespan of a Khao Manee, though many have longer lives. Providing you keep up with health checks and remember to protect your cat from hot sun your kitty should live a good few years.

Unless you live in Thailand you may require a lot of patience in finding a Khao Manee kitten. However, that being said, it’s quite possible to come across one of these cats in a breed specific shelter.

This would not only save you thousands of dollars but give an unwanted pet a home. There are many reasons why such a precious cat would end up homeless.

You may also find social media groups advertising Khao Manee kittens for sale. Be very cautious though as there are plenty of scams and unethical breeders.

I’d recommend contacting local shelters first. Even if you can’t find a Khao Manee you may be able speak to someone who can offer advice.

The TICA and CFA may also be able to help locate a breeder. Remember to always use your gut instinct and be wary of being sold a kitten that isn’t a Khao Manee!

I hope I’ve answered your questions about the Khao Manee cat and helped you decide if this is a good breed for you. As you’ve discovered, this is a rare cat believed to bring good luck by the Thai population.

However, as more are imported into the US and UK this will change over time. Their beautiful white coats and large jewel colored eyes make the Khao Manee a very desirable pet.

As you’ve also discovered, this breed is quite dog like in nature and easily trained. Added to which, a sociable nature makes them ideal for families and those with other animals.

Wising you a purrfect day:)