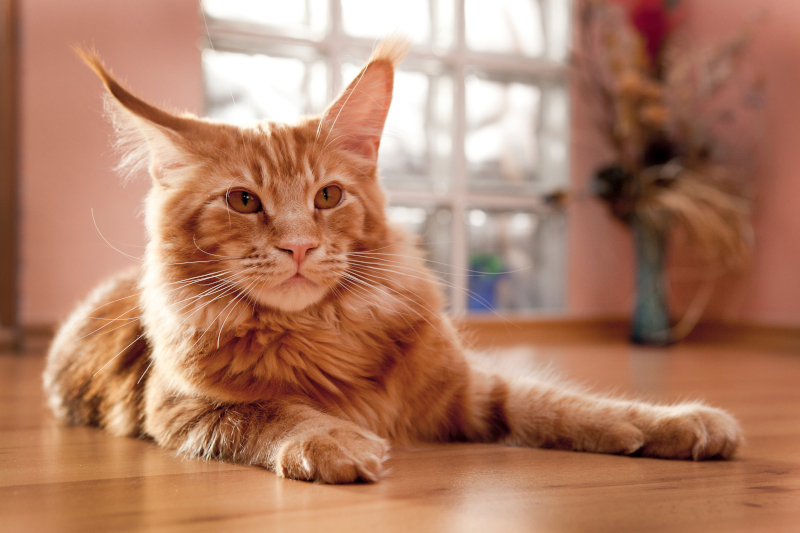 How big do maine coon cats get? you’ll find the answer to this question here, as well as lots more information about these beautiful kitties. Maybe you’re thinking of adopting one, or just curious. Either way you’ll find everything you need to know.

Maine coons are the only true American breed of cat. While there’s no real certainty of how they evolved, there are a few theories. A very strange one that’s completely impossible, is that a racoon mated with a domestic cat. As we all know, mating between two completely different species can’t happen! Another theory is the mating between a bobcat and domestic cat.

Actually, bobcats have physical similarities to maine coons. Their large tufted ears look almost the same, and both have thick fur and large feet. Other theories suggest sailors bought over norwegian forest cats on their sea crossings. This is quite plausible, as both are giants of the cat world and fairly similar in appearance.

Also, a sea captain named Coon, was allegedly said to have a love of persian and angora cats. He took his cats with him on long voyages from England to America, and the tale goes while he went ashore chasing women, his cats followed suit!

During the late 1800s, maine coons were often shown at agricultural fairs up and down the country. Sadly, their popularity died as persian cats were introduced. However, one breeder in particular kept the maine coon breed alive, preventing them from dying out.

In the mid 50s the maine coon cat club was formed, and is still widely popular today. It wasn’t until the 1980s though that maine coons were imported into the UK. Strict quarantine laws put many off the idea.

5 Maine coons with different colours finally arrived in 1984, and a cat club set up in 1985. As breeding began, their popularity soared. People fell in love with these gentle giants, and they’ve now become one of the most sought after breed of cat.

How big do maine coon cats get?

Maine coons are known for their massive size, and holding one in your arms can be a challenge! Males are larger than females and can weigh up to 25lb! The average domestic kitty weighs just 71b, so you can see the difference!! Of course, some kitties can be heavy, especially if obese, but none could outweigh a maine coon!

The largest ever recorded maine coon is believed to be Ludo. At 34lbs he’s certainly a big boy! He guards his human family silently and protectively, and is very much loved.

The longest maine coon measures 3ft 11 inches from head to the tip of the tail. Named Barivel, he lives in Italy with his owners, and is quite the local celebrity!

Maine coons usually continue to grow until they’re around four or five years old. In contrast, a typical moggy will have reached maturity by around 18 months. Larger breed cats are known for their long growth time, but as kittens look no different to any other.

If you’re looking for a lap cat, this may not be the right choice for you. Though you can’t generalise, most maine coons prefer to sit next to, or near to their human companions. This may be a good thing considering their massive size!

What is the personality of a maine coon cat?

Now you know the answer to “how big do maine coon cats get?” you’ll want to know a little bit about their personality. Despite their enormous size, maine coons are very gentle, and make ideal pets if you have children. In fact, you may find your big kitty keeping a watchful eye on your little ones!

These gentle giants make wonderful playmates for young children, and their kind, sweet nature means they’ll join in all their games! Maine coons are inquisitive and highly intelligent cats. They love being around children, so you need never worry about introducing your kitty to a new baby.

Many maine coon owners say how dog like they are. Their loyal, loving nature is a characteristic that sets them apart from other more aloof kitties! It’s likely you’ll be greeted by your cat on your return home, and may even play a game of fetch!

In general male cats tend to be more loving and outgoing, and maine coons are no exception. You can expect your maine coon kitty to be highly entertaining and have you in fits of laughter.

These fun loving companions seek out playmates and will respond to anyone who gives attention. This is why children get on so well with them. Females are also loving, but in my experience of cats, males often have the edge over females.

Is it easy to train a maine coon cat?

Many pet owners still believe you can’t train a cat, but despite their reputation for only pleasing themselves, once you know how to train your cat to fetch, you’ll be showing your friends what a clever kitty you have!

It’s even possible to teach your maine coon to shake paws and do a high five! Many dogs can do this trick and it’s great fun to watch. Don’t underestimate the intelligence and capability of maine coons. With a bit of patience and lots of treats you’ll be amazed what you can achieve!

If you’re thinking of adopting a maine coon you may be wondering if they’re high maintenance. As long as you have the time to brush your kitty twice a week, you’ll be fine.

However, this is important and should never be overlooked, otherwise you’ll have matts and tangles to deal with. Learning how to groom your cat the right way is an essential skill for all pet parents of long haired kitties.

Of course, interacting and playing with your maine coon is hugely important. As previously mentioned, these are highly intelligent cats and will easily get bored. You may want to think twice about getting a maine coon if you’re going to be out for a long period every day. Although, you could always adopt two kittens from the same litter as they’ll keep each other company.

Make sure you have plenty of toys for them to play with unless you want find shredded curtains or cushions when you get home! You can get cat condos suitable for large cats giving your kitty the opportunity to climb and play.

Maine coons are generally very healthy with a life expectancy of between 12-18 years. However, there are a few health problems that may occur. These include hypertrophic Cardiomyopathy, a condition where muscles in the wall of the heart become thickened. It’s a genetic mutation and is present in around 30% of maine coons.

Hypertrophic Cardiomyopathy causes an increase in heart rate, but can be treated with drugs to slow it down. Not all cats with the genetic mutation will develop heart disease, but if you’re considering adopting a maine coone it’s a good idea to talk to a breeder. Cats should always be tested in order to prevent the gene being passed on.

Polycystic Kidney Disease is fairly common in maine coons, and can be inherited. PKD causes multiple cysts to form on the kidneys eventually affecting other organs. There’s no cure, and the only treatment is diet. Some cats only develop small cysts that don’t cause any problems, and you may never know your kitty has this condition.

Reputable breeders will ensure all maine coon cats used for breeding have been screened and tested negative. Lastly, Spinal muscular atrophy is a genetically inherited disease that’s sometimes seen in maine coon cats. It causes unsteadiness, and awkward posture. Even though it can’t be cured it’s not fatal and doesn’t cause pain.

Is a maine coon the right breed for you?

Now I’ve answered the question “how big do maine coon cats get,” as well as covered other common questions, I hope you understand a little more about these stunning cats. If you have the time to groom your kitty every week, and not looking for a lap cat, then you may be a perfect match. As with buying any other breed of cat or dog, always check them out first and don’t be afraid to ask questions.

14 thoughts on “How Big Do Maine Coon Cats Get?”