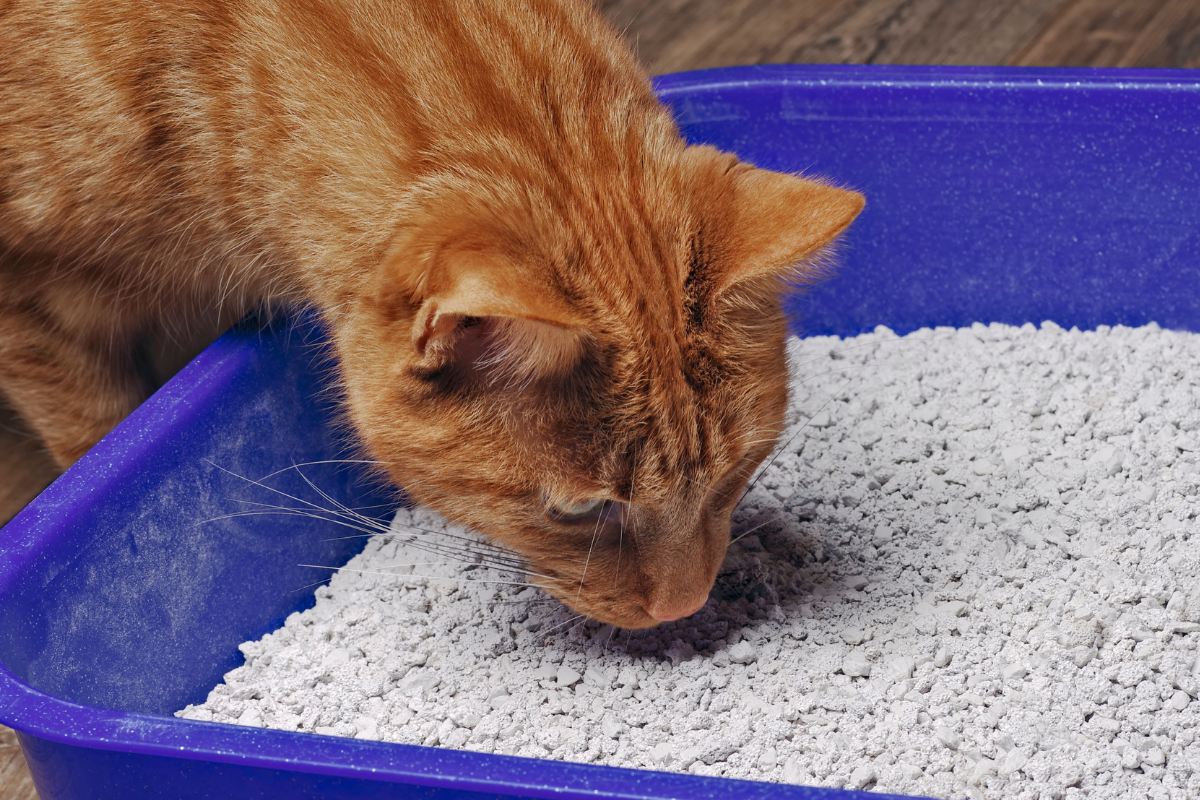 Does clumping cat litter work and does it stop odor? This is a question you may be asking if you want to try a different brand or are a new user. Whether your feline friend spends most of her day outside or prefers the indoor life, you will need to provide a litter box.

Even if you have a cat flap, there may be times you want to keep your kitty inside. It’s also good to give your cat the option. Threats from other cats outside, or bad weather are good enough reasons.

What is clumping cat litter?

Even though you’ve heard of clumping cat litter you may be wondering what it is compared to other types. Actually, clumping litter dates back to the mid 1980s, so it’s still quite new. Made from bentonite clay it’s very absorbable, as fine particles bind well together when wet.

However, some brands are dusty, which may cause breathing problems if you suffer from asthma. Although there are some makes that claim to be almost dust free including Fresh Step and Tidy Cats

Non-clumping cat litter has been around since the 1940s and is great at soaking up urine. The main downside though is you need to clean the box more often, and you can’t remove solid waste easily.

In contrast clumping litter forms solid blocks which can simply be removed without wasting much. All you need do is pick out the clumps and rake over the surface adding a little more if necessary.

Non-clumping can smell if not changed often enough, though some brands have added charcoal or baking soda to neutralise unpleasant odors. On the plus side it’s good at absorbing large volumes of urine, though it can pool at the bottom of the box.

If you’re saving money, then you’ll find clumping cat litter is often the cheapest. If you have back problems though, don’t buy large bags of it from your local store. Though cheaper it’s also very heavy, and you’d need help carrying it out to the car.

This is because clay is a very dense and heavy material. A bag of non-clumping litter can be quite light in comparison, with some brands using recycled materials such as paper. In addition organic materials including wood chips or pine are also popular.

Cats as any pet parent knows, can be very finicky! If your cat doesn’t like the litter you’ve chosen it’s possible she may find somewhere else to “go”, such as your bed! This is why it’s important to introduce a new litter gradually.

Can you flush clumping cat litter?

One of the worst chores of being a cat parent is bagging up cat litter waste and taking it outside to the bin. While some brands of cat litter are marketed as being flushable, most would block your toilet.

Clumping cat litter is designed to form hard clumps when exposed to liquid. While this is ideal for removing solid waste, clumps of bentonite clay will block your pipe system. As a result, you could be paying your local plumber a large sum of money!

In addition, your home will smell like a litter box, and guests won’t find it very inviting. It can take a long time to get rid of the odor and even burning scented candles isn’t guaranteed to help.

Whether cat litter is clumping or non-clumping, you should never attempt to flush it down the toilet. Even if a brand composed of organic material claims it’s safe, my advice is take the extra time to put it in bin bags.

How deep should you fill the litter box?

Cats love to dig and scratch around in the earth. Anything less than three inches isn’t enough. It’s a cat’s natural instinct to cover waste. This is because cat urine and feces have a very strong odor that attracts predators. Even though your feline friend is safely indoors her instinct is still there.

However, overfilling the box can result in spillage. Apart from wasting litter, your cat may end up kicking excess amounts onto the floor and tracking it everywhere.

Most brands of clumping cat litter claim to stop odor. As previously mentioned, the addition of charcoal and baking soda help neutralise bad odor. In addition, clay in itself is a natural absorber of unpleasant smells.

However, there’s only so much odor that can be controlled. Failing to change the litter often enough will result in a smelly box your cat won’t want to use. A cat’s sense of smell is 14 times greater than a human’s, so even if you can’t detect odor, your cat certainly will!

Fresh Step has a 10 day odor control guarantee and has a scent similar to Febreze. If you’ve not tried scented litter before, you could start by adding a little bit to your cat’s regular brand. You’ll soon know if she doesn’t like Febreze!

Is clumping cat litter bad for the environment?

Bentonite clay used I’m making clumping litter is mined in shallow pits that leave unsightly scars on the earth’s surface. In order to create these mines, large areas of forest are destroyed an along with it, wildlife habitat.

In addition, the removal of topsoil leads to depletion of natural minerals. Clay isn’t biodegradable either, and take years to decompose.

So what is the alternative?

While traditional clay based clumping cat litter will remain popular, there are biodegradable alternatives made from natural, plant based materials. These include corn cobs, recycled paper, wood chips, and wheat. World’s Best is made from corn cobs and claims to be 99% dust free.

Clumping litter made from recycled paper is composed of small pellets, and is safe for the environment. Yesterday’s News clumping cat litter claims to be virtually dust free. It’s made from a mix of recycled paper and cardboard made into pellets.

Whether you decide to use clay based clumping litter or organic, try and stick to the same brand as some cats don’t like change. Clay has the advantage of being less expensive, and the texture can feel more natural on your cat’s paws. The finer the particle the more natural it will feel to your cat.

Imagine the feel of waking bare foot on a soft sandy beach, compared to walking on a pebbly beach. Well this is probably how your cat feels stepping into a box of soft fine clay, composed to pellets or sharp silica.