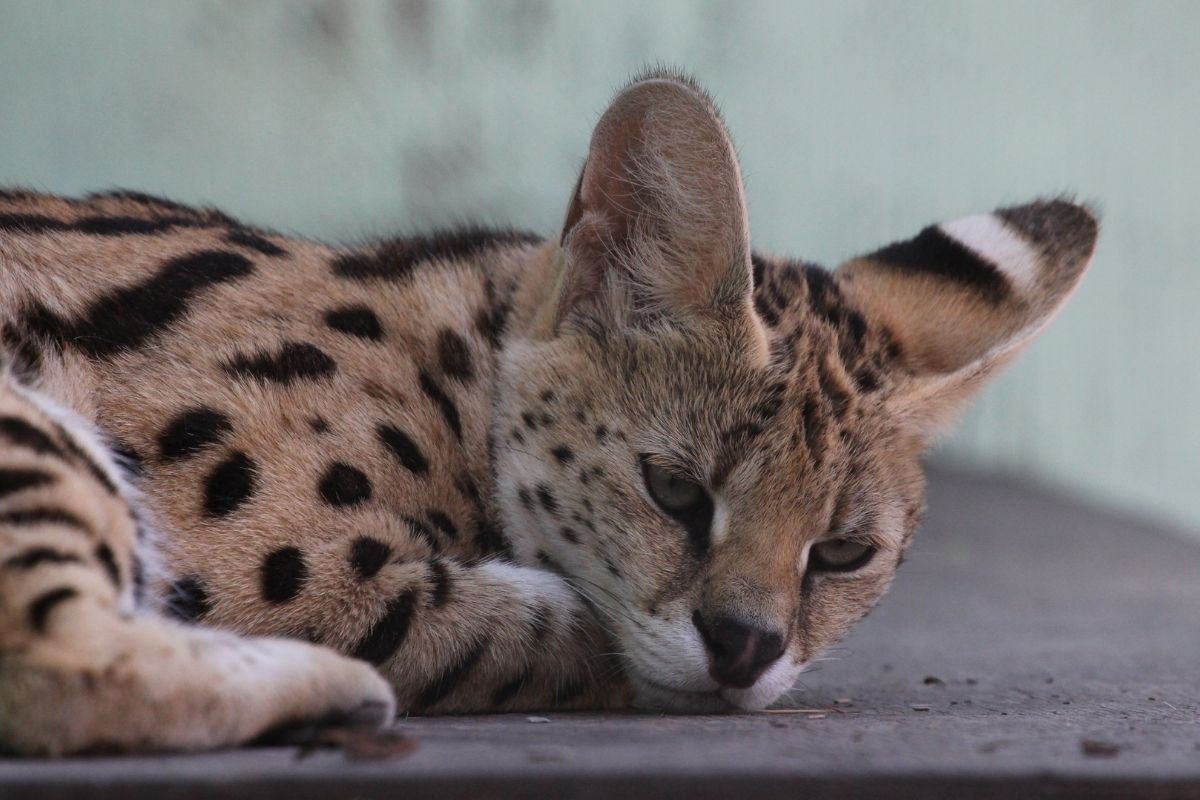 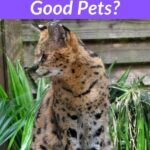 If you want a cat that’s a bit on the wild side you may be asking “do serval cats make good pets?” Keep reading as you’ll discover all about this exotic breed of cat and if they’re safe to keep as pets.

Whether you’ve already heard about the Serval cat and want to know a bit more, or if you’re serious about adopting one I hope to provide you with the answers you’re looking for.

The Serval is actually an African wild cat and commonly found in sub saharan countries. However, this doesn’t include North African regions though.

If you’ve heard of the Savannah cat you may know they’re closely related to Serval cats and often kept as pets. Some are classed as dangerous whereas others are much more like a domestic cat.

Despite their wild streak, Serval cats are not much bigger than a medium size dog. Don’t be fooled into thinking their small size makes them less dangerous though as they’re expert hunters.

Serval cats have a beautiful fawn colored coat with black lines and spots. This helps create a camouflage against grasslands, forests, and wetlands.

If you look closely at a Serval you’ll notice a long neck and small head. Despite having a small head the ears are large in proportion. In addition, Serval cats have long slender legs allowing them to jump up to 9 feet in the air. They’re also second fastest cat to the Cheetah and can reach speeds up to 80 kilometers an hour!

While big cats including lions and tigers don’t purr with contentment, smaller wildcats including Servals can. In addition, they can also meow, hiss, and chirp, just like a regular moggy.

However, don’t think for a minute this is your average moggy! If you want a cuddly lap cat don’t even think about adopting a Serval!

In fact, though I just mentioned Serval cats can purr, this is only if they’re domesticated. Cats never purr with each other as it’s only reserved for humans!

Is it legal to keep a Serval cat?

This seems to depend where you live. For example, here in the UK it’s illegal to keep a Serval or first generation Savannah cat.

I don’t know how the law stands on this in other countries so you’d have to do some research. If you live in America you may find laws on keeping exotic or dangerous pets vary from state to state.

It’s possible you may find Serval cats that are generations removed from their African ancestors, but you’d need to look into this very carefully.

How safe is it to keep a Serval cat?

If you’ve discovered you can legally keep a Serval in your area, you may be wondering is it safe? The answer to this question isn’t straightforward as it depends on the environment.

For example, if you have other pets or young children then no, don’t even consider the idea. No matter how cute they look, Serval cats are wild animals.

They have a very strong hunting instinct and could easily attack a smaller domestic cat or dog. In addition, a small child would be at very great risk.

A baby or toddler trying to hug a Serval cat could have devastating and tragic consequences. Even if you’re around to supervise you never know what could happen.

On the other hand if you don’t have kids and live in an area with plenty of open land you may be ok. Also, bear in mind that Serval cats are great escape artists! Not only can they jump very high, but are talented at digging their way underneath fences!

So even if you have a high cat proof fence, there’s no guarantee your Serval kitty will happily stay in her enclosure. Finding a wild cat roaming the neighbored and terrorising pets isn’t something you want to happen.

Though Serval cats are rarely aggressive towards humans, they could hunt and kill local wildlife, eat your neighbors chickens, and badly hurt other pets.

By what I understand, if you live in America, some states will require you to buy a licence. Therefore always do your research first.

Keeping a Serval in an environment that’s not only safe but stimulating requires careful planning. These cats have tons of energy and need to be able to burn it off. This means providing enough space for running, jumping and climbing.

You need to be mindful of any breakables and keep them safely out of reach. Bear in mind, Servals have no problem jumping great heights, so either place as close to the ceiling as possible or store them in a cupboard.

You’d also need to provide a heavy duty cat tree as well as plenty of toys. In addition, an extra large litter box would be an essential item.

Remember, this breed of cat is quite large and the average Serval weighs around 29 pounds. This makes them heavier than a Maine Coon, or other large breed domestic cat.

This is why a regular litter box wouldn’t be suitable. Also, while we’re on the subject of litter boxes, Servals won’t use one once it’s soiled. This means extra work for you as you’d need to clean it daily.

You’ll need to train a Serval kitten to use a litter box as unlike domestic cats it doesn’t come naturally. With a bit of patience and love though there’s no reason why it shouldn’t work out.

Never scold a Serval or any other breed of cat. Instead, reward for good behavior. As I’ve mentioned before in other posts, cats aren’t motivated by praise in the same way as dogs. Instead, they tend to respond to what’s in it for them.

As Servals are natural retrievers you’ll find your cat fetching toys and household items. Bear in mind, this breed have very strong jaws and would destroy anything small.

In fact, small cat toys could even choke your Serval if swallowed. The best idea would be to buy toys designed for large dogs. Young kittens though would be fine with small chew toys.

Although Servals are wild cats it doesn’t mean they can’t be domesticated. In fact many owners find they form strong bonds with them.

Treating a Serval with respect and kindness is the best way to bond and form a strong friendship. There are a few points to bear in mind though.

Firstly, if you’re rehoming a Serval you’ll be seen as a predator for quite a while. Kittens are different as you’ll be all they’ve known.

I can’t emphasise enough the amount of time needed to gain trust with one of these cats. Expecting to bond with your Serval in a few hours will lead to disappointment.

A good tip is to sit quietly in the same room and get on with whatever you’re doing. Whether reading a book, watching tv, or working on your laptop.

Let your inquisitive Serval come to you. Don’t try and force her to do anything she doesn’t want to. NEVER raise your voice or hit your cat.

This would be the worst thing you could do, and completely destroy any trust you may have already gained. This rule applies to any cat, but much more so with Servals.

Expect months rather than weeks for complete gain of trust. Just like anything else in life, perseverance always pays off.

Another well known tip for gaining trust with a Serval is hand feeding. Offering a Serval cat pieces of food directly from your hand helps install trust.

Servals are highly intelligent and quick to learn. Once you’ve shown reaching your hand towards your cat means reward, your Serval will start to trust you.

What do Serval cats eat?

Feeding an adult Serval can work out expensive as you’ll need to provide your hungry kitty with a mix of high quality wet cat food such as Iams, and whole prey.

You’ll be glad to hear though that Servals aren’t fussy eaters. In the wild they’ll eat anything from small rodents to snakes, and even frogs.

Their powerful legs and amazing ability to jump up to 9 feet in the air makes catching prey a breeze. Whole prey can mean raw chicken or beef, but NEVER feed cooked meat

In addition it’s often recommended to supplement the diet as well, but you’d need to consult your vet. Kittens up to six months old should be fed minced raw meat. This is because they’re not able to chew large bones.

Serval kittens need four or five small meals each day, whereas adults can be fed a bit less frequently. Cats are opportunist hunters and do most of their hunting at night.

In contrast to big cats who only have successful hunts ten percent of the time, Servals are far more successful. This means they can eat multiple times a day.

However, it’s considered normal for Servals to eat more food some days and hardly any other days. This can often apply to domestic cats as well and shouldn’t be cause for concern.

Are Serval cats the right breed for you?

Many people who decide to buy a Serval kitten end up rehoming it. This is because a fully grown Serval cat is not only expensive to keep, but has a lot of strength in it’s powerful body.

Lack of research and full understanding of what’s involved in keeping one of these cats can lead to heartbreak. You’ll need plenty of savings to fall back on and a decent income to afford upkeep.

Expect to pay around $1700 for a Serval kitten, but only ever buy from a reputable breeder. If you’re unsure check them out first.

Insuring an exotic pet can also work out expensive, and you may have to buy a licence as well. In addition, you’ll also need to get your cat vaccinated.