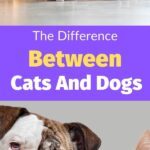 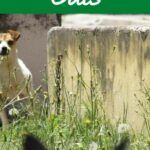 How well do cats and dogs get along is a question you may be asking as a pet parent. Whether you have a cat and thinking about getting a dog or the other way round, this post will help answer your questions.

It’s a common belief that cats and dogs are sworn enemies with neither being able to tolerate the other. However is this really true or is it possible for cats and dogs to live together in harmony?

As a pet parent myself, I’ve owned a cat and dog together with no problems. The dog was a large German Shepherd who was very protective towards the cat.

This isn’t always the case though as there are many factors involved. In this article I’ll be sharing some of the things you need to consider before adoption.

Why cats and dogs are so different

Of course there are physical differences between dogs and cats, but one main thing to bear in mind is language. It’s obvious that dogs bark and cats meow, but you need to think about body language as well.

This is where cats and dogs are so different and misunderstandings occur! For example, if your dog is happy he wags his tail, but if a cat does the same it’s usually in aggression.

In addition, if you were to observe cats greeting each other you notice how they look each other straight in the eye. If a cat did this to a dog it would be seen as aggressive behavior. It’s no wonder then that cats and dogs don’t always get along!

One of the reasons cats and dogs don’t along is a dog’s instinct to chase. A large breed dog may view a little kitty as prey. Though Fido may not chase cats in your neighborhood with the intention of eating them, he could certainly give them a scare!

You see dogs have a strong prey drive and view smaller mammals such as cats or rabbits as prey. Actually, some breeds such as the greyhound, bull terrier, and Springer spaniel have an exceptionally strong prey drive.

This is something you need to bear in mind if you’re thinking of adopting a cat with a dog.

If you have one of these breeds of dog you need to keep a close eye on a first meeting with a new cat, especially if it’s only a kitten. Though no harm may be intended, an over excited dog could cause injury.

Another big difference between cats and dogs is their personality. While dogs are seen as noisy and outgoing, cats tend to be much quieter.

There are breeds of cat though that act like dogs, and often get on well with dogs and children. This could be a good choice if you want to adopt a cat and dog together.

Introducing a cat to your dog

If you’re a dog owner and want to adopt a cat you first have to think about your dog’s personality and breed. As previously mentioned, some breeds just aren’t naturally suited to being around cats.

A high prey drive combined with excitable personality could prove challenging. I’m not saying it won’t work, but you’d need to train your dog to be calm around the new arrival.

Points you’d need to watch for include staring and becoming fixated on the cat. In addition, whining or barking are imminent signs your dog may be about to pounce.

Getting a cat and dog used to each other

In the same way you’d introduce two cats to each other the same applies to introducing a dog to a cat. This means taking things slowly and putting your cat in a separate room.

Don’t rush this step but allow a couple of days for them to get to know a little bit about each other. Scent is hugely important in the animal kingdom, conveying information we wouldn’t begin to understand.

If your cat has never lived alongside dogs before, installing a Feliway diffuser may help make your new kitty feel calm. Many veterinary surgeries use them to help keep feline patients calm!

Next, get hold of a stair gate or something similar. This is to create a barrier between your two pets.

Making sure your dog doesn’t jump the gate, allow them a brief view of each other. This means the gate must be quite tall as cats can jump very high.

Do not do this with kittens though as it’s easy for a little kitten to squeeze through narrow gaps. Instead, consider putting your kitten inside a large dog crate.

Do this in advance, allowing your kitten time to get used to the crate. Keep it open allowing her to climb in and out and place her food bowls inside.

It must be big enough for her to use a scratching post and litter box as well as play with toys.

When you feel it’s safe for your dog and cat to see each other, open the door briefly. Keep your dog on a lead just in case and allow both pets to see one another.

If your dog growls or barks distract him with a toy. The idea is to get your dog used to being around his new housemate without acting aggressively.

Let your dog approach the cat calmly and reward with a treat. You may find your cat stares at the dog, deciding if it’s safe to investigate further.

This is normal, but if your cat starts growling it means she feels threatened. It’s not just dogs that growl. I’ve often heard my cat make a low growling noise if he’s spotted next doors dog!

Never try to rush things as both pets must learn to feel comfortable with each other for things to work out. Once you feel it’s safe to remove the gate do so cautiously.

Supervise your dog watching for any aggressive behavior. Once you feel confident they’ve accepted each other you can relax.

Can your dog and cat become best friends

Now your dog and new cat are comfortable in each other’s company can they become best friends? As with human relationships, they take time to develop.

I’m sure you’ve found, there are some people you’ll never become best friends with but learn to tolerate. This is often down to personality which can’t be altered.

Well the same applies to dogs and cats. As previously mentioned, certain breeds of dog have a very high prey drive. It can be hard to curb a dog’s instinct to chase making your cat vulnerable.

Similarly, some cats love chasing dogs! Although most breeds of cat are quite small, this doesn’t seem to put them off!

I hope this article has helped answer your question “do cats and dogs get along?” Whether you want to adopt a dog and cat together or if you have a cat that’s used to being around dogs, it can work out.

Sometimes a lot of patience will be required, but with the right training there’s no reason why they can’t become friends.

8 thoughts on “Do Cats And Dogs Get Along?”