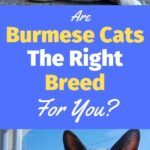 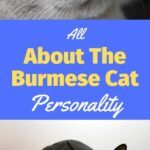 If you want to know about burmese cats you’ve come to the right place. In this post you’ll discover all about these elegant felines. We’ll be looking at the origins of the breed, and their fascinating background, as well as temperament.

If you’re wondering what a burmese looks like we’ll be touching on appearance and coat colours. We’ll also be looking at the personality of this oriental breed and if it’s a good match for you.

If you’re concerned about any health issues we’re covering that to. Looking after your kitty properly is vital for her wellbeing. Being aware of any health problems helps you know what to look out for.

Where do burmese cats originate from?

According to legend, thousands of years ago Burmese temples provided home for ancestors of these little cats. They were much loved and even had their own servants! Fast forward to 1930 and a naval doctor named Dr Joseph Thompson brought a brown short haired cat home with him from Burma.

When he arrived back in San Fransico with his cat, she became a firm favourite with his patients. Thompson disagreed with cat fanciers that she was part siamese. Her body was much more compact, her tail shorter, and she had a domed shaped muzzle.

He named his little cat Wong Mau and she won a special place in his heart. In order to prove his kitty was not part siamese he decided to conduct a breeding experiment. A male seal point siamese was imported from Thailand and Wong Mau mated with him. The resulting kittens had dark brown coats, and when mated together produced offspring with solid brown coats.

This was enough to prove these cats were a breed of their own and not a siamese hybrid. Burmese cats have become a very popular breed over the years and loved by cat fanciers.

If you’ve never seen a photo of a burmese cat I’ll try and explain. Modern burmese have coat colours varying from dark sable brown, blue, champagne, cinnamon, lilac, tortoiseshell, through to red. Burmese cats have short, silky coats and a muscular body. They’re not very large compared to other breeds and have stockier legs than siamese. They also have a rounder head and shorter muzzle.

When the kittens are born they have turquoise coloured eyes, but around 10 weeks you’ll see them change to a beautiful shade of amber. The belly and chest area is lighter than the rest of the body and shading is gradual.

If you want a cat that’s lovable, and craves attention this could be the right breed for you. You’ll never feel alone, and the friendly chatty nature of a burmese will soon win your heart. Burmese cats are very demanding and absolutely hate being alone.

If your lifestyle involves being out at work all day you may want to consider getting two cats. Burmese kitties get on well with other burmese more than other breeds. It’s not a good idea to get this breed of cat if you’re not going to be home a lot of the time.

Burmese cats are very opinionated and not afraid to get their point across! Don’t be surprised if you start having conversations with your burmese! They are very vocal and have a distinctive sound. It’s not as loud as a siamese and has a soft edge to it.

Be prepared for lots of cuddles. This truly is a lap cat and needs lots of petting. Unlike most cats, burmese don’t wander off and do their own thing. They love to be involved in what you’re doing. You may even find your burmese wants to help out on the laptop and starts pressing keys for you!

Burmese cats are known for being very dog like. Apart from following you everywhere they also enjoy playing fetch! Many owners find it quite easy to train their burmese kitties. Just like people though, some are brighter than others!

Providing entertainment for your burmese kitty.

As you’re now aware, burmese cats are highly intelligent. Expecting your kitty to be happy lying around all day doing nothing is wrong. A burmese needs lots of stimulation. As I previously mentioned, they crave human company and insist on being involved in every part of your life.

Toys involving interaction with your cat are best. Balls that can be thrown and retrieved are great. Robotic toy mice are good fun, but be on hand to join in! Playtime with your kitty is essential for bonding, in fact your burmese will insist on it!

As I just mentioned burmese cats are easy to train and enjoy a game of fetch. It seems to be a natural instinct with some breeds, and almost like they’re trying to train their owners!

Should I allow my burmese cat to go outside?

While I’m all in favour of giving your cat free outside access, this breed is a bit different. Because of their friendly outgoing nature they’re easy to approach. My cat runs a mile if he sees anyone, but a burmese cat will wander up to a stranger if called.

It’s entirely your decision, and you may want to think about the safety of your area. A quiet neighbourhood with little traffic may be ok. If you know your neighbours and feel happy letting your kitty outside then go ahead.

A good idea would be to invest in a cat run if you have a garden. Your burmese will be able to exercise and enjoy the fresh air in safety. They can be quite large so will give your cat ample space to run and jump.

Do burmese cats have any health problems?

You’ll be pleased to hear that burmese cats are generally a healthy breed. They have slightly longer lifespans than many other breeds and you can expect a burmese to live to at least 18 years.

The main conditions you’ll need to be aware include diabetes melitus. This is more common in older cats and those suffering obesity. Diabetes in cats can be managed just as it can in people.

hypokalemia is a condition when potassium levels become very low. Burmese cats seem prone to this, but fortunately it can be treated with supplements. Regular check ups at the vet are important as they’ll identify any problems before they become established.

Are burmese cats easy to care for?

Despite being very demanding they are low maintenance. All burmese cats have silky short hair coats. Weekly grooming sessions are all that’s needed. I don’t have a burmese but can highly recommend the Silicone Grooming, Shedding and massage brush. I have a short hair black and white kitty, and he loves it.

As with all cats you should get into the habit of brushing their teeth. Dental disease in cats is prevalent, but can be prevented. Trimming your kitty’s nails is also important especially if she’s an indoor cat. If you’re unsure of how to do this it may be best to find a groomer or get your vet to do it.

All cats have likes and dislikes just as we do, but it’s important to feed your burmese quality cat food. There’s no special dietary requirement, but avoid cheap brands as they often contain less meat and packed out with fillers. Low calorie, high protein foods are best. Provide a mix of dry and wet food. Kibbles help stop a build up of plaque which can lead to dental disease.

How much do burmese cats cost?

If you’re considering getting a burmese cat you could try adoption first. There are so many unwanted cats as owners find they can’t look after them for whatever reason.

If you have your heart set on a certain type of burmese you may want to find a breeder. Be very careful though and do your research. Steer clear of any breeder who is reluctant to let you see the kittens.

Also, a genuine breeder will have certificates and proof the kittens have been vaccinated. It’s very important young kittens are vaccinated against cat flu and enteritis before they leave their mother.

If you buy a burmese kitten from a breeder expect to pay about £800. Be very wary of anyone who offers you a cat for a lot less unless you know them well.

Are burmese cats the right breed for you

Now you know a bit about burmese cats you can begin to decide if this is the right breed for you. Physical appearance may play an important role, but personality and being able to care for your fur baby are essential.

In this post you discovered where burmese cats originated from. You learned about their coat colours and physical features. You also found out a little bit about the personality of a burmese, and if they’re easy to look after.

We looked at entertaining burmese cats and the toys best suited for them. While some cats are happy playing on their own, this oriental breed thrives on interaction. One thing is for certain, you’ll never feel sad and lonely with a burmese kitty in your life!

I hope you’ve enjoyed reading all about burmese cats. Whether you’re just curious or thinking about adopting one, I’d love to know what you think. Please feel free to leave a comment below. Also please share this post if you’ve found it useful. and feel free to share this pin on your “pets” board.