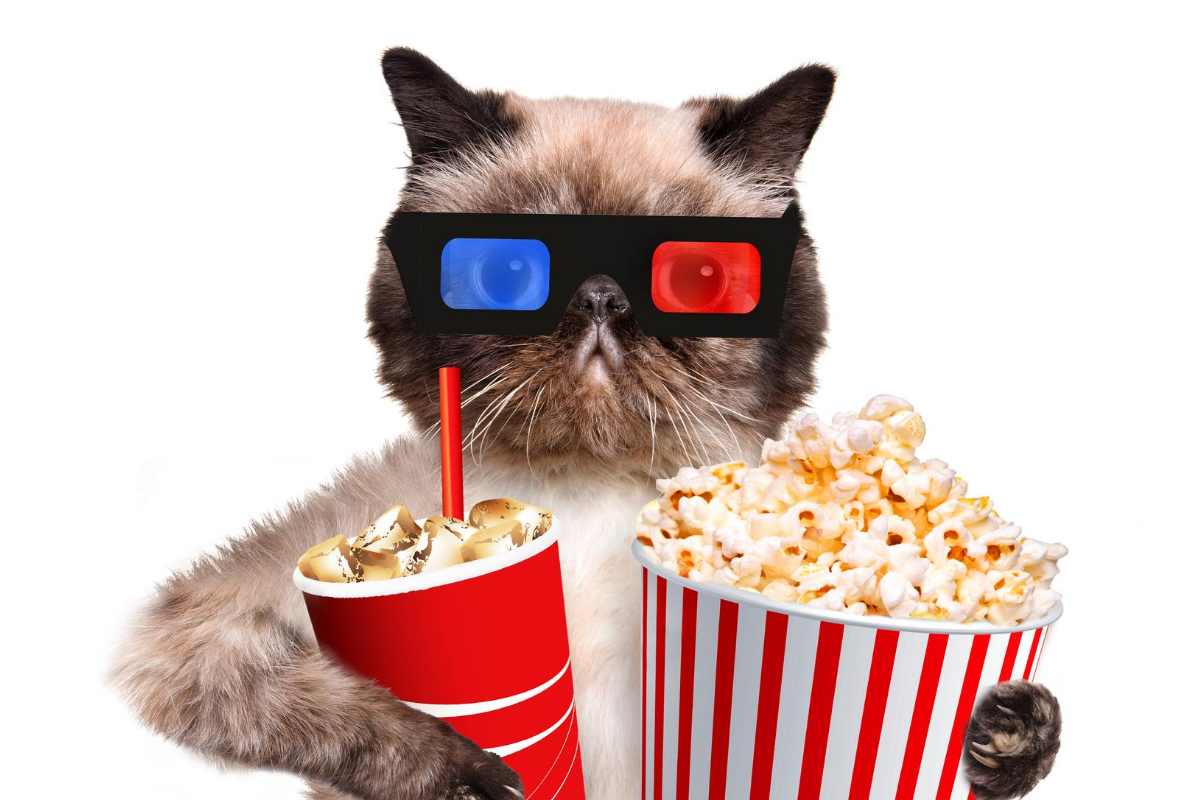 If you’ve found your kitty staring at the TV screen, you may have wondered if can cats watch TV? Do they see images the same way as us, and are they capable of understanding what they’re watching?

In this post you’ll find out what’s going on in your cat’s brain when she sits on your lap enjoying the latest episode of Corrie. Maybe your a tennis fan though, and you laugh at the way your cat follows the ball on the screen. Or perhaps she seems fascinated by wildlife programs. Hopefully though, your kitty doesn’t take control of the remote and choose what to watch!

Cats have fewer cones than humans, so don’t see the range of colours we do. This doesn’t mean they only see grey tones though. Scientists have been researching how well cats see for years. It’s a fascinating topic, however no one has yet been able to see through the eyes of a cat. As they can’t talk, any findings are purely subjective.

It’s believed cats see colours far less vibrantly than we do. In fact images on your tv screen probably seem very desaturated. In addition, it’s thought cats see certain colours much better than others with a greater ability to see blues and greens.

Fine detail is something your cat can’t see. This is because felines don’t have a fovea, which humans have. The fovea enables you to see crystal sharp detail. High definition images on a TV screen would mean nothing to a cat.

Your cat is unable to focus on near distance objects. As a result, anything less than a foot in front of her would be blurred. This means she won’t see TV images as clearly as you.

When you watch TV you see everything in fluid motion. However, when your cat looks at the screen she probably sees flickering images that make no sense. This is because humans process images at a rate of approximately 45 HZ, whereas cats process images at about 70-80 HZ

When you’re watching a wildlife program and see a bird flying in the air, your cat probably sees the bird, but as a series of flickering images. This would be entertaining enough to hold her attention for a while. In addition, she may even look behind the TV to find the bird!

Why your cat’s night vision affects how she sees TV

Though your feline friend can’t see any better in total darkness than you can, she has superior low light vision. With only one sixth of the amount of light needed to see compared to humans, the TV screen will appear ultra bright. Surprisingly though, this won’t hurt your cat’s eyes.

Beware of your cat’s hunting instinct!

Cats seem to vary in their desire to hunt. Though your cat may be well fed she still maintains her basic hunting instinct. My cat has a fairly strong prey drive, with occasional evidence to prove it! However, some kitties seem to enjoy a quieter life, especially as they get older.

The danger of your cat trying to jump on the TV is very real. If you’re watching a program featuring rodents or other feline prey, have some toys to hand. Watch your cat’s reaction and if you feel she’s getting ready to chase the mouse on screen, distract her with a toy one instead.

Why you should never leave your cat watching TV unsupervised!

As you can see from the image, my cat Alfie was getting very involved with the weather forecast! Luckily, I had a close eye on him as he was getting so excited! Flat screen TVs can be knocked over if they’re not close to a wall. As a result, the weight of an excited heavy kitty launching itself at the TV could spell disaster!

Fortunately, many people nowadays mount flat screen TVs onto a wall, but be mindful if yours is free standing. The danger is greater if your kitty has a strong prey drive, as she may decide to pounce on the bird or mouse! Though your cat may not distinguish the bird as being real, she’s still attracted to the moving image.

Scientists believe cats are able to recognise outlines and patterns on TV images, however no cat has spoken about what they really see! No one truly knows if a cat sees a mouse shown on screen to be a mouse or just a random moving object.

There’s nothing funnier than watching a cat following a tennis match on TV. Cats are drawn to motion, and the flickering images of a moving object such as a ball have huge entertainment value. As you can see in the video below, these cute kitties are big tennis fans!

If your watching a program that features another cat, your kitty won’t react in fear or feel threatened. Even if she recognises the outline and shape she won’t hiss at the animal. This is because there’s no scent. Your feline friend relies heavily on her sense of smell to identify other animals. In fact she can “read” other cats by their scent marks left behind. In some ways this is similar to a calling card.

Big cats won’t scare her either! If your cat sees a lion or tiger on the screen she won’t run and hide! She may possibly identify the outline as being feline , but that’s about it.

Is the TV just a big window to your cat?

We all know how cats love to sit on window sills. Whether outside looking in, or inside gazing outside at the wildlife. It helps stimulate the brain and stops boredom. In fact a high perch near a window is the perfect lounging spot for your kitty.

Does your cat see the TV screen as a window? After all, she gets excited at looking at wildlife programs. Again, the answer is, no one really knows unless cats can talk. However, the prospect of a cat speaking English would be daunting to most owners!

“Get my dinner now!!” or “Do you seriously expect me to watch that rubbish?,” would be common phrases! Some cats may even demand their own TV!

Is your kitty a TV addict?

Does your cat have her favourite programs, or does she just binge watch everything? Now you know the answer to can cats watch TV, I hope it’s helped you understand a little bit about your feline friend’s fascination with television and how she sees the screen.

Of course, all cats are different just like humans. While some are very active and prefer the outdoors, others like nothing better than curling up on the sofa watching their favourite TV show!