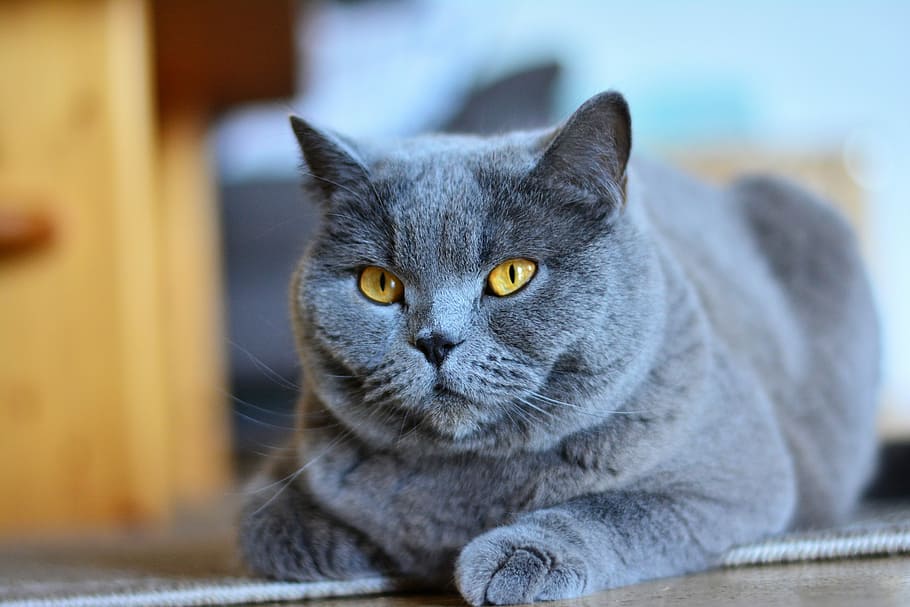 If you want to know all about Russian blue cats you’ve come to the right place:) These beautiful, elegant cats have become very popular over the years, and are sure to win your heart!

In this post you’ll discover all about Russian blue cats including appearance, personality, and lots more. In addition, you’ll learn how the breed originated, and if they’re easy to care for.

As the name suggests, Russian blue cats are believed to have originated from Russia. There’s a rumour surrounding an idea that the breed developed from cats kept by Russian Czars. It’s thought, trade ships would have carried them to Europe and England, though there’s no definite proof.

In 1875 the very first Russian blue cat was shown at an event in Crystal Palace. As well as being called Russian blue, they were also known as archangel cats. This has nothing to with heavenly archangels, but the island of Arkhangel’sk in Northern Russia! This is supposedly were many of the cats came from.

In addition, grey cats similar to the Russian blue are found in northern regions of Europe. Their dense, thick fur serves to keep them warm in such a cold climate. Such countries include Scandinavia and Finland.

You can’t mistake a Russian blue cat by her elegant, graceful appearance. The coat is short and very dense with a silvery blue sheen and feels like soft velvet. Her long elegant legs have small oval paws, and a wedge shaped head is topped with large pointed ears. In addition, large round, emerald green eyes add to her stunning beauty.

Although blue is always associated with this breed, there are white and black kitties as well, although quite rare. The modern wedge shaped head is the result of cross breeding with Siamese. This practice started after World War 2 when Russian blue cats started declining in numbers. They were also bred with British shorthairs creating the classic blue-grey fur.

Underneath that dense covering of fur you’ll find a lean, muscular body that’s agile and built for running. Any prey in the sights of a Russian blue kitty would have a hard time evading capture!

What is the personality of a Russian blue cat?

If you want a kitty that will love sitting on your lap watching tv, you’ll make an ideal match. This breed loves company and will follow a favourite human everywhere. Expect to be greeted by a vocal “hello” on return home! Your blue Russian kitty will give you a running commentary on her day, and will make sure you pay attention!

Though happy in the company of her human family, a Russian blue will be shy of strangers. If you bring friends home don’t be surprised if your kitty hides under the bed. Just like other felines, they need alone time, so ensure you have a private space she can retreat to. This could be a cat condo or cat tower perch. Even a book shelf or windowsill makes the perfect retreat.

Russian blue kitties don’t mind being on their own during the day, however you will be expected to play when you get home! If you’re thinking of getting one you’ll need to get plenty of toys! This breed are highly intelligent and love being active.

Running around, climbing, and jumping are favourite pastimes. In addition, they love plenty of attention from their human parents. Ignore a Russian blue at your peril as they can sulk! Though it takes time to win the trust of these cats, they are affectionate with those they feel close to. In fact Russian blue cats can be highly sensitive to the emotions of their human carers.

Can you train a Russian blue cat?

This breed is highly intelligent and you should have no problem training your kitty. In fact some owners often say it’s the other way round, and the cats train them!! Always reward your cat every time she completes a task as this reaffirms good behaviour.

As they’re a naturally evolved breed, Russian blues are on the whole very healthy. However, they have large appetites and prone to weight gain. Ignoring that pleading stare can be hard, but giving in could lead to an obese kitty! Be careful not to over indulge your Russian blue with treats either as you can create some very bad habits!

Obesity can lead to many avoidable health problems such as diabetes and heart disease. Ensuring your cat has annual health checks will reveal any early signs of disease. As weighing is part of the check up, your vet will be able to advise if your kitty is a bit overweight.

Feline lower urinary tract disease, or FLUTD, is a disease that can affect all cats, but Russian blues seem genetically predisposed towards it. This affects the bladder and uretha often making it very painful to pass urine. Early signs include meowing loudly in the litter box and making crying noises.

If your kitty seems to have problems urinating you must get her examined by a vet as soon as possible. Bladder stones blocking the uretha can be fatal if left untreated. Treatment is usually very effective and in many cases involves a change in diet and increase in water consumption. Special prescription diets are available, and most vets will recommend switching to wet food.

Autosomal dominant Polycystic kidney disease is an inherited condition affecting certain breeds of cat. These include British shorthairs, Persians, and Russian blue. The disease affects the kidneys as multiple cysts develop from birth. Though already present, they become larger over time, affecting the function of the kidneys.Though there’s no cure, a combination of prescription diets and medication help ease symptoms.

Caring for your Russian blue cat

Just because some diseases are genetically inherited doesn’t mean your cat will get them. As previously mentioned, they are basically a very healthy breed. Unlike some more exotic breeds of cat, the Russian blue can live into her twenties. Caring for your kitty and spotting early signs of any health problems help ensure a long and happy life.

One thing about Russian blue cats is they don’t shed much hair. This is one of the points that attracts allergy sufferers. In addition this breed produces low levels of Fe d1. However, you still need to groom your cat regularly to keep the coat in good condition. This also allows you to spot any problems such as fleas or ticks. Use a quality brush such a slicker, which helps remove loose hair and dander.

It’s recommended you brush your cat once or twice a week, especially during spring. This is when their lighter coat develops, so you may notice more shedding around this time. Brushes such as the petkit gently massage the skin as well as remove loose hair. I have a similar one for my shorthair cat and he loves it:)

Another good thing about Russian blue cats is a lower incidence of hairballs. Most longhair kitties and even shorthair ones occasionally produce hairballs. As the Russian blue is a low shedding cat there’s less fur to swallow.

If you’ve set your heart on a Russian blue kitty, you’ll need to find a breeder in your local area. Do some research and ask your vet for advice. Most importantly, check the breeder out to make sure she or he is genuine. Sadly, there are some only interested in making money without much care for their animals. This applies to both dogs and cats.

It’s important you’re allowed free access to the cats and their kittens. If any excuses are made as to why you can’t see them, move on. You need to see both the parents and their kittens. While you’ll probably want to take all the kittens home with you, take time to examine them. Look for bright clear eyes and a healthy shiny coat. In addition check the ears for any mites. These will appear as tiny white dots inside the ear.

Look for a kitten that’s active and lively as well as one that’s keen to engage with you. I know it’s really hard to choose and if you’re like me, you’d simply want them all!!

So now you know all about Russian blue cats I hope it’s helped you decide if this is the right breed for you. These gentle, loving kitties would suit most people, especially those with allergies. You may want to adopt two if you’re out at work all day as these cats need plenty of stimulation. In addition, as mentioned earlier, get plenty of toys for your cat to play with to avoid destructive behaviour!

Russian blue cats generally get on well with other pets, but always follow the rules of introducing a new cat to your resident fur family. Their gentle nature also makes them the ideal pet if you have young children.

10 thoughts on “All About Russian Blue Cats”