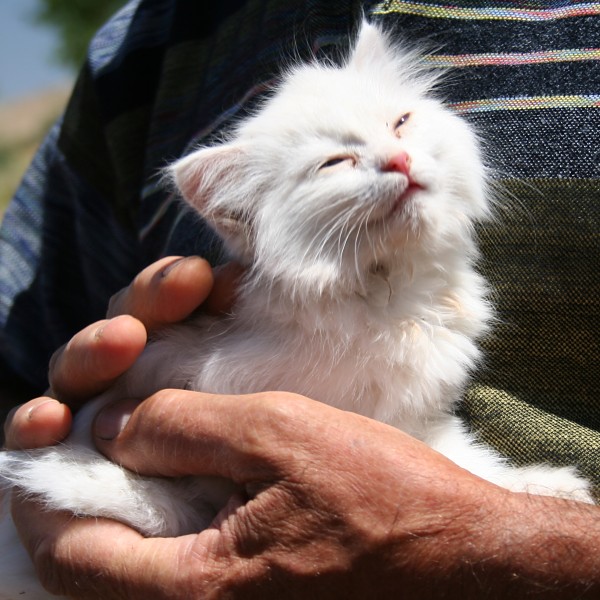 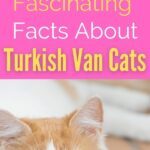 In this post you’ll discover all about the Turkish van cat. You’ll find out how and where the breed originated, and the temperament of Turkish vans. Plus, we’ll look at one of the most peculiar traits of this breed that’s totally unique. In addition, you’ll learn about any health issues this cat may have, and if this is the right breed for you.

Once you’ve set your heart on getting a cat you need to think about whether you want a moggy or a certain breed. There are hundreds of different breeds of cat, and all have their own unique characteristics. Some are more demanding of your time while others are easy to please.

The Turkish van cat is one of the rarest breeds in the world, but is gaining popularity. Unfortunately, if you live in America you may find it hard sourcing a Turkish van cat breeder, however, as breeding increases there will be more offering kittens. Some countries like the UK and of course, Turkey will probably have breeders near to, or in your area.

About the Turkish van cat origin

Turkish van cats are believed to be one of the oldest breed of domestic cat in the world. Their origins go back to an Eastern region of Turkey called Lake Van. This lake area, apart from being a stunningly beautiful place to visit, is home to the Turkish van.

It’s thought the breed goes back five thousand years, and though mostly found in the Turkish Van area, similar cats are seen in Iraq, and other parts of the middle east. It wasn’t until the 1950s that this breed were brought into Europe by a couple working for the Turkish Tourist board.

This chance occurrence happened after the couple took some photos of Lake Van. The board were so impressed, they gifted them with two kittens, a male and female. During their stay in Turkey, the couple camped near a stream and where totally shocked when they saw the kittens going for a swim!!

This is something unheard of as cats detest water! On their return to the UK, they allowed the two cats to mate, then brought more back with them on another trip to Turkey. Gradually, the numbers have increased, though still relatively uncommon. They are attainable though, but you may need to be patient until you find a breeder.

The coat is semi-long, and very silky and soft in texture. You can’t mistake a Turkish van’s tail as it’s very bushy, looking more like that of a squirrel than a cat! The eyes are either a beautiful amber or blue in colour. In fact, it’s not uncommon for the breed to have one of either!

Unlike many breeds, the Turkish van has a single coat. Other’s such as the Persian have thick undercoats, requiring a lot of grooming. During the summer months, a Turkish van’s coat is light and of a shorter length, but in winter it’s longer and thicker. A ruff of fur covers the chest area, and tufts of fur can be found between the toes. These disappear in Spring when the winter coat sheds.

The Turkish van is a large cat with a muscular body, though not stocky. Males are bigger and weigh on average between 10-12lbs, whereas females ten to be smaller and weigh between 7-10lbs. The ears are large, and the eyes round and very expressive. You’ll be pleased to hear this breed is mostly healthy and can live into the 20s if well cared for.

In addition, full maturity isn’t reached until the cat reaches between 3-5 years. So you’ll have a kitty teenager for quite a few years!

As promised, I’m going to share with you a very unusual trait that’s only found in the Turkish van. If you remember earlier I mentioned the couple’s astonishment at seeing their kitties swimming!

Well this isn’t found in any other domestic breed of cat, so how did it evolve? Firstly, the silky fine coat of a Turkish van is water repellent and dries very fast.

It’s believed these cats started swimming when chasing after fishing boats bringing in early morning catches. As I’ve often said, cat’s only do something if there’s a reward! We can only assume this is why the swimming trait was passed down through generations! However, it’s only speculation and no one knows the real reason, apart from the cats!!

Sadly, as word got out about these felines, many more were exported to Europe, dwindling the number of purebred Turkish vans. After 92 were left, the breed became officially recognised by the Turkish government. You’ll be glad to hear very few are exported these days, and in addition, a local university set up a breeding program to increase numbers.

All about the Turkish van cat personality

If you want a cat that’s more dog like in nature, look no further! The Turkish van has bundles of energy, and loves to play. You’ll have no problem getting your cat to exercise, and having a large garden is ideal.

A large majority of Turkish van owners in the United States don’t allow their cats to roam outdoors. This of course is a personal decision and entirely up to you. If you live on a busy main road or fearful of something bad happening to your kitty, I fully understand.

If your outdoor space is fairly large you could always consider cat proof fencing, or even a cat run. At least you’ll have peace of mind that your kitty is safe while enjoying a spot of sunbathing or exercise. Although these cats love water, it’s still important to cat proof any garden ponds or water features. In addition, chlorine used in swimming pools would be highly toxic to your cat

You must always supervise access to water and never leave your cat unattended. Don’t be surprised though if your Turkish van starts helping you with the washing up! She may also take a keen interest in your bath time and want to join in the fun!! However, keep her well away as she’ll be exposed to some very harmful chemicals.

Turkish vans are very athletic with powerful hind legs. Jumping high is easy, so don’t be surprised to find your cat peering down at you from the top bookshelf you thought was out of reach!

These are mischievous kitties, always looking for fun. If you want to guard any precious ornaments put them away in a cupboard. Also, never leave food unattended in the kitchen as your Turkish van will be quick to find it!

If you’re looking for a lap cat this may not be the right for you. While Turkish vans enjoy a cuddle with their owners, they do so on their own terms. You may find your kitty will sit on your lap for a short while, but will soon be off searching for the next adventure!

Are they good with other pets and children?

If you have dogs or other resident cats you should be ok, but always use the correct way for introducing a new pet to your fur family. Turkish van cats don’t like being pulled around, so I’m not sure if they’re the ideal choice for those with small kids. Older children should be fine though.

You’ll be glad to learn that Turkish vans are easy to care for. Despite their semi-long coat they don’t require a lot of grooming. Single coated cats don’t get matted fur on the same scale as those with double coats. You’ll still need to brush your kitty on a weekly basis though, and monitor for any signs of fleas or ticks.

Although your Turkish van kitty will attracted to water, don’t expect her to enjoy a bath. Just like other breeds, it can be a fight, with the cat usually winning! Unless your kitty falls in to a muddy puddle, or gets covered in soot, brushing is all that’s needed!

You should however trim her claws regularly, and brush her teeth. Dental hygiene is just as important for our pets as it is for us. An astonishing number of cats suffer from dental disease over the age of 3 years old.

Playtime is essential, and lots of it! Invest in plenty of toys to keep your kitty entertained, and distract her from your valuables! As mentioned earlier, Turkish vans are very energetic, so you’ll need time each day to play with your cat.

What about health issues?

Generally speaking, the Turkish van is a very breed with few inherited diseases. That being said, it’s still important to keep up with annual health checks and vaccinations. All cats just people can develop illnesses at any stage of life. Cats are notorious for hiding pain and discomfort which is why early diagnosis is so important.

Is the Turkish van the right breed of cat for you?

Now you know all about the Turkish van cat, do you feel it’s the right breed for you? Think twice about adopting one if you you’re obsessively tidy! If you love an orderly home expect chaos as your kitty jumps on your work desk desk sending neatly filed paperwork flying everywhere!

Don’t consider a Turkish van if you’re always busy with little time to spare. Though low maintenance, you must make time for playing with your cat every day. If you’re out at work and exhausted when you get home the last thing you want is a demanding kitty!

Finally, think carefully if you’ve young children or other pets. Ideally you would have a nice big garden in a safe rural area. However, as mentioned earlier, they can be an indoor cat, but will need a lot of entertaining.

Also if you have any questions, or would like to share your experiences, please leave your comments below.

12 thoughts on “About The Turkish Van Cat”