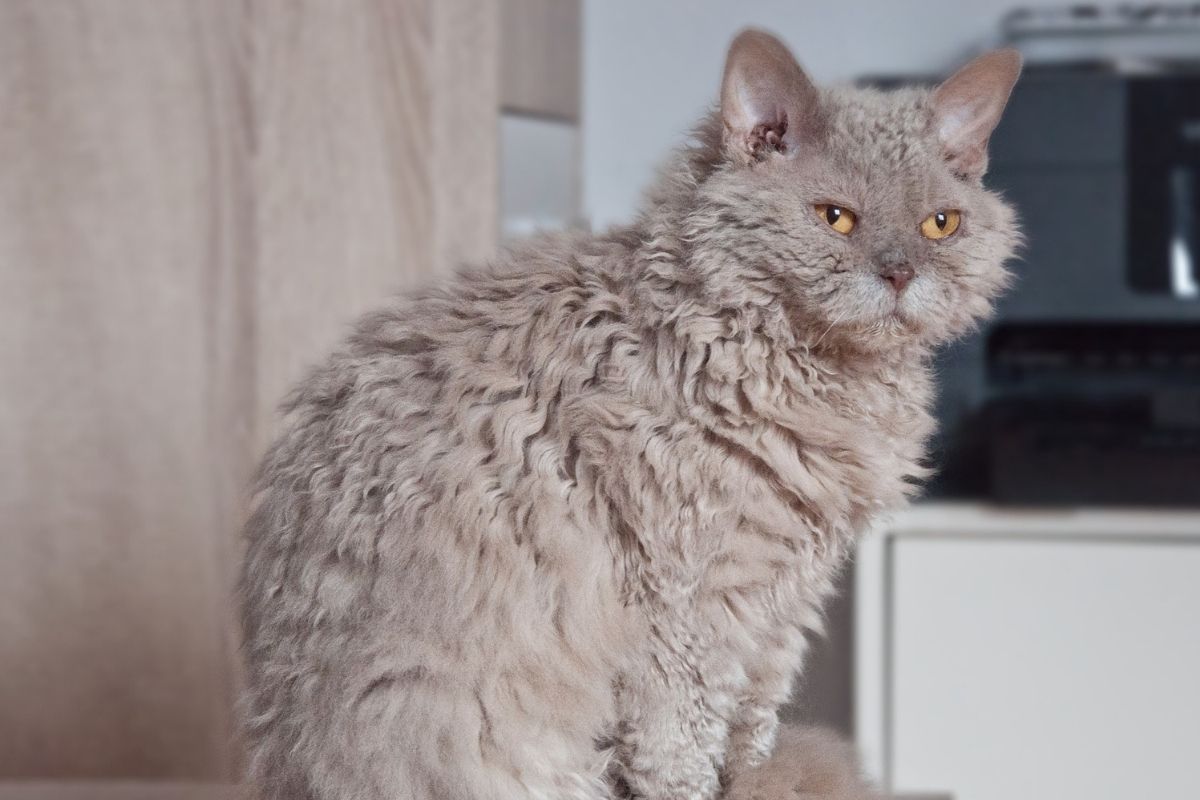 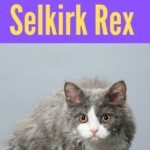 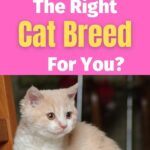 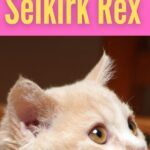 If you want to find out about the Selkirk Rex cat you’ve come to the right place. Whether you’re just curious or thinking of adopting one, you’ll discover everything you need to know.

The Selkirk Rex is a fairly modern breed, developed in the 1980s and it’s unusual curly coat gives it an exotic appearance. “Rex” is a name given to breeds of cat and rabbits with curly hair. In fact you may have already heard of the Devon Rex which has become a very popular breed.

A brief history of the Selkirk Rex

The Selkirk rex had very simple beginnings and certainly can’t be traced back thousands of years like some breeds. You may be surprised to learn this cat only came about by pure chance, after a fuzzy haired kitten was adopted by a couple in Montanna.

The couple had an interest in genetics and were actually contacted by the shelter to ask if they wanted to see it. You’ll be amazed to learn that out of six kittens in the litter only one had a curly coat.

They named the kitten after Miss Depesto, the curly haired actress who was famous at the time. This little cat was mated with a Persian and thus began the new breed.

If you’re wondering how the breed got it’s name, you may be surprised to learn it was after the father in law. Also, a mountain range in the area is known as Selkirk.

You often find breeds of cats and dogs are named after the region they originated from. Being named after a person is slightly more unusual.

How the breed was developed

As Miss Depesto’s owners were interested in genetics they were curious as to how a curly coated kitten could be born from a straight haired cat, especially as it was the only kitten with curly hair in the litter.

You’ll be interested to hear they searched the local area for any wire haired or wavy haired cats. After no findings they assumed it must have been a one off!

In order to develop a cat with softer curls, rounder face and muscular body, it was decided to mate Miss Depesto with their Persian male. You’ll be pleased to hear it was a success with three curly haired and three straight haired kittens.

One of the curly kitties named Oscar was bred to British Shorthairs and Persians, as well as bred to Miss Depesto. Although you may be alarmed to hear of a kitten being bred back to it’s mother, it was done to find any serious problems associated with the gene.

Allowing male kittens to mate with the mother can increase the chance of birth defects though. This is why it’s important to get kittens neutered or spayed when they’re old enough.

Cats aren’t fussy and will happily mate with siblings or parents given the chance! Inbreeding is common practice among breeders to get a particular look or trait. However, too much can result in offspring with lowered immune systems and other health problems.

Anyway, you may like to know that Oscar fathered four kittens from his mum. Three curly and one straight haired. Also, none of the curly coated offspring produced any straight haired kittens.

If you’re wondering when this curly breed was recognized, it happened in 1994. Both the TICA and ACFA recognized the Selkirk Rex as a breed during that year.

If you were to look at a Selkirk Rex for the first time, you’d understandably think the poor kitty was having a bad hair day! In fact they’ve earned the nickname of “the cat in sheeps clothing!”

In addition to it’s mass of curls, Selkirk Rex cats also have curly whiskers! This can give a slightly frazzled look!

If you’re asking if all Selkirk Rex cats have curly coats you may be surprised to learn there are straight haired and wavy hair varieties as well. This is because each litter can have a mix of the dominant and recessive gene responsible for curly coats.

Also, you may notice your cute curly coated kitten’s curls fall out during her first few months. In addition, her curly whiskers may break off.

This is nothing to be alarmed about as it’s perfectly normal. You’ll find both her curls and whiskers will grow back by the time she’s six to eight months old.

Selkirk Rex cats are a stocky build with round heads, large round eyes, and chubby cheeks. You’ll be able to choose between long or short haired cats, with a variety of colors and markings.

If you were to pet a Selkirk Rex cat you’d notice how soft the coat feels. These cats have a dense double coat which resembles wool in texture. In fact you may even think about knitting a jumper from your curly cat!

Thickest areas of coat tend to be around the flanks, belly, and neck. This is where you’ll find the curls are most prominent. In addition, short haired Selkirks tend to have tighter curls, whereas long haired have looser curls. You may even find some with wavy hair.

If you were to pick up a Selkirk Rex you’d probably find it quite heavy to hold. With a weight of up to 16lb and body size medium to large, this is no lightweight!

So now you’re probably wondering about this fuzzy kitty’s personality and if it’s right for you. Keep reading to find out..

About the Selkirk Rex personality

If you’re looking for a cat that’s loving and fun to have around, this may be the breed for you. The Selkirk Rex has a playful nature and loves attention.

Despite her size, this kitty loves spending time on her parent’s lap snuggling up. Also, she’ll enjoy sitting on a cosy windowsill or exploring a cat tree.

With her affectionate and loving nature, the Selkirk Rex would make the perfect companion for a senior. However, if left alone, boredom soon sets in!

If you’ve got your heart set on one of these curly kitties, you’d be advised to get two if you’re out at work all day. However, if you already have other pets you should be fine.

Unlike some cat breeds, the Selkirk doesn’t look for mischief, but does like to be entertained. Providing her with a few toys will keep her happy while you’re out or busy working.

This breed of Rex has a sweet, patient disposition, making her the ideal pet if you have young children. Always supervise though, just in case.

Caring for your curly kitty

Despite her dense, curly coat, this cat requires minimal grooming. In a similar way to humans with curly hair, over brushing can result in a frizz!

In fact, it’s advised never to brush a curly Selkirk, but use a comb instead. Once or twice a week is all that’s needed to keep the coat in good condition.

Over grooming can make the curls appear flat, but not grooming enough can result in knots and tangles. Shedding is quite low compared to many long haired cat breeds, however the Selkirk isn’t hypoallergenic.

While no cat is truly hypoallergenic, some breeds like the Russian Blue have less Fel d1. This is the protein many people allergic to cats are sensitive to.

You’ll be pleased to hear Selkirks have few health problems. However, as this breed have been mixed with Persians, they can be susceptible to hypertrophic cardiomyopathy in their senior years. Also PKD could be another health issue to be aware of.

Important points to consider with any cat or dog are dental and nail care. Cleaning your cat’s teeth should be part of her grooming routine. You may however, want to leave nail trimming to a professional.

Is the Selkirk Rex the right breed for you?

Now you know a little bit about the Selkirk Rex I hope it’s helped you decide if this breed is suitable for you. As you’ve learnt, the Selkirk is fairly low maintenance despite its thick, curly coat. However, if you’re out all day you’d need to provide entertainment.

There are no special dietary requirements, and the breed is considered very healthy. Regular health checks and vaccinations should help keep your cat in good shape.

There are only 4 cat breeds with curly coats including the Selkirk Rex. Others are Devon Rex, Cornish Rex, and La Perm. If you’ve enjoyed this post please share. Feel free to share this pin on your “pets” board

10 thoughts on “About The Selkirk Rex”