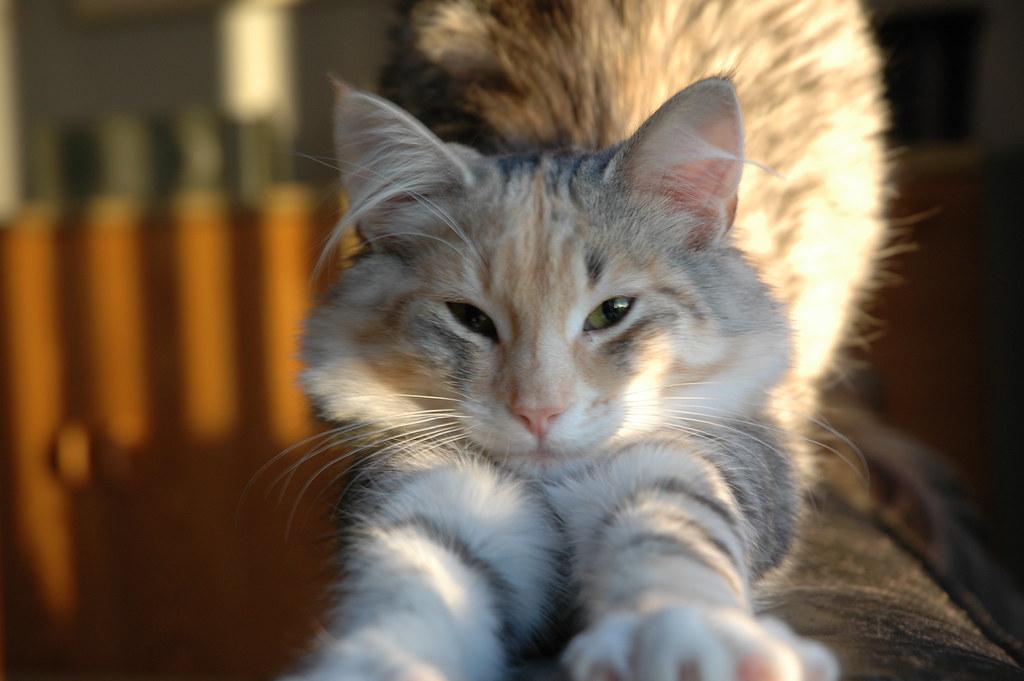 It’s important to know as much about a breed as you can before making any decisions. You have to think about your lifestyle and if you’d have enough time to give your kitty the care she deserves. All breeds are different and some are more needy than others.

The Norwegian Forest cat is noted for it’s luxurious long hair which will mean regular grooming. In addition it’s also a high shedding cat so you’ll need a powerful pet vacuum to suck up all that loose hair and dander!

This is a large breed cat and fairly similar to a Maine Coon, so nothing like your average moggy! Many breeders also suggest getting two from the same litter as they form close bonds with one another

A brief history of the Norwegian Forest cat

Norwegian Forest cats have been around for centuries and native to Norway. Also known as Skogcatts, they have evolved to withstand the harsh climate of Norwegian winters. No one really knows how the breed developed, but it’s thought they’re either decendants of long haired Turkish cats, or simply shorthaired cats that adapted to survive the cold northern climate.

This would have been a process of natural selection with generations developing wooly undercoats and long silky topcoats. This type of coat is ideal for cold, snowy climates. It’s thought farmers kept these cats to kill mice and would have been rewarded with food and shelter.

It wasn’t until 1938 that the Norwegian Forest cat was first shown at a cat show in Oslo, but sadly the second World War put an end to any plans for further developing the breed.

Finally, by the late 1970s the breed was finally registered, and a male and female were exported to the United States. At that time, the Maine Coon was already a popular breed and the similarity between them was stunning. The Norwegian Forest cat was also registered in Europe and accepted into the Cat Fancier’s association in the early 1990s.

As mentioned previously, the Norwegian Forest cat is a large breed with males weighing up to 20lb. That’s a lot of cat, so not one to blend into the background! They have a strong, muscular body that’s always ready to jump into action!

Wegies as they’re also known as, have a double coat with a range of coat colours including tabby, cream, red, black, and white. Their coat is prone to shedding and these cats are high maintenance.

You’ll need to allow time for grooming your kitty, with at least two sessions a week. Make sure you get the necessary tools before bringing your cat home.

Grooming a long hair cat isn’t hard, but you will need a brush for long hair cats and in addition combs and a detangler. Failure to groom a Norwegian Forest cat may result in knots and tangles which can be hard to get rid of. Though not as prone to tangling as other breeds it’s still essential to brush your cat.

The head is triangular with tufted ears, and long whispy hairs. These hairs are designed to detect wind and snow, a necessity for survival in the harsh winter climate of its origins.

The paws are large and round in shape. Tufting between the toes act as snowshoes providing insulation from the freezing cold ground. Long fluffy tails make the ideal wrap when sleeping during the cold winter months.

Personality of the Norwegian Forest cat

If you want a cat with a loving, friendly personality, the Norwegian Forest cat is the perfect choice. Expect to be followed everywhere, so don’t be surprised if your kitty accompanies you to the bathroom!

These cats like to be where the action is, so whether that’s in the bathroom, kitchen, or living room, you’ll have a constant companion. Many are lap cats, but there’s no hard and fast rule. Just like any other kitty, some love a cuddle, whereas others like their own company for a while.

Generally speaking Norwegian Forest cats respond to praise, so you may find it easier to train one of these cats as opposed to other breeds. Despite their massive size and shaggy appearance, Wegies are gentle giants and very sociable.

If you already have a fur family, you’ll be pleased to know these kitties get on well with other animals. They don’t mind sharing their territory, but you’ll still need to follow basic rules when introducing your new cat to other pets.

Norwegian Forest cats are the perfect breed if you have kids. Their gentle, patient nature make the perfect companion for your children. They’re very playful and love joining in games! In addition, having pets helps develop compassion and empathy.

If you decide on a Norwegian Forest cat I’d strongly suggest getting a cat tower with high perches. These cats love climbing and exploring. You can get some very robust cat towers for large cats. Unless you live in an unsafe area it’s kinder to let your kitty explore the outside world. If you have a large garden with trees that’s ideal.

Wegies are also masters at climbing, so if you want to keep your kitty within the safe boundaries of your garden, a low fence won’t be enough. Cat proof fencing will keep your cat safe, or alternatively, a cattio may be your ideal choice. Either way you’ll be able to let your precious cat enjoy the great outdoors safely.

The Norwegian Forest is generally a very healthy breed with a lifespan averaging 14-16 years. The fact that it’s a naturally evolved breed plays a big part. However, hypertrophic cardiomyopathy, a type of heart disease found in certain breeds such as the Maine Coon and Persian, may sometimes be inherited.

Also, polycystic kidney disease can occasionally be inherited, though ultrasound tests can reveal any signs. Just like any other breed of cat, annual check ups at the vet as well as vaccinations help pick up any health problems early.

You can also spot any problems during grooming sessions. I talk about this in my post about grooming your cat. Lastly, one very important part of cat care parents often overlook is dental care. Brushing is just as important for your kitty as it is for you.

If you decide to adopt a Norwegian cat you’ll need to buy food that’s high in protein and low in carbs. Most quality cat food is formulated for optimum health, so it’s just a question of finding one your Wegie likes. Due their large size these cats eat more than a regular kitty, however, frequent small meals are best.

This is how they’d feed in the wild, and replicating this is better for your feline friend’s overall health. Ask your vet’s advice or talk to a breeder if your not sure. Most will be only too happy to help.

If you’ve got your heart set on a Norwgian Forest cat you’ll probably want to find a breeder. The best idea is to search online and start in your local area. Always take care when chosing a breeder and never be afraid to ask plenty of questions. You can expect to pay around £650 for a kitten here in the UK, but if you’re lucky you can sometimes find them in rescue centres.

Is the Norwegian Forest cat the right breed for you?

Now you know a little bit more about the Norwegian Forest cat, I hope it’s helped you decide if this breed suits your lifestyle. Whether you’re single or have a family, Wegies can easily steal your heart. Their stunning looks and gentle, personality make these cats easy to fall in love with.

6 thoughts on “About The Norwegian Forest Cat”