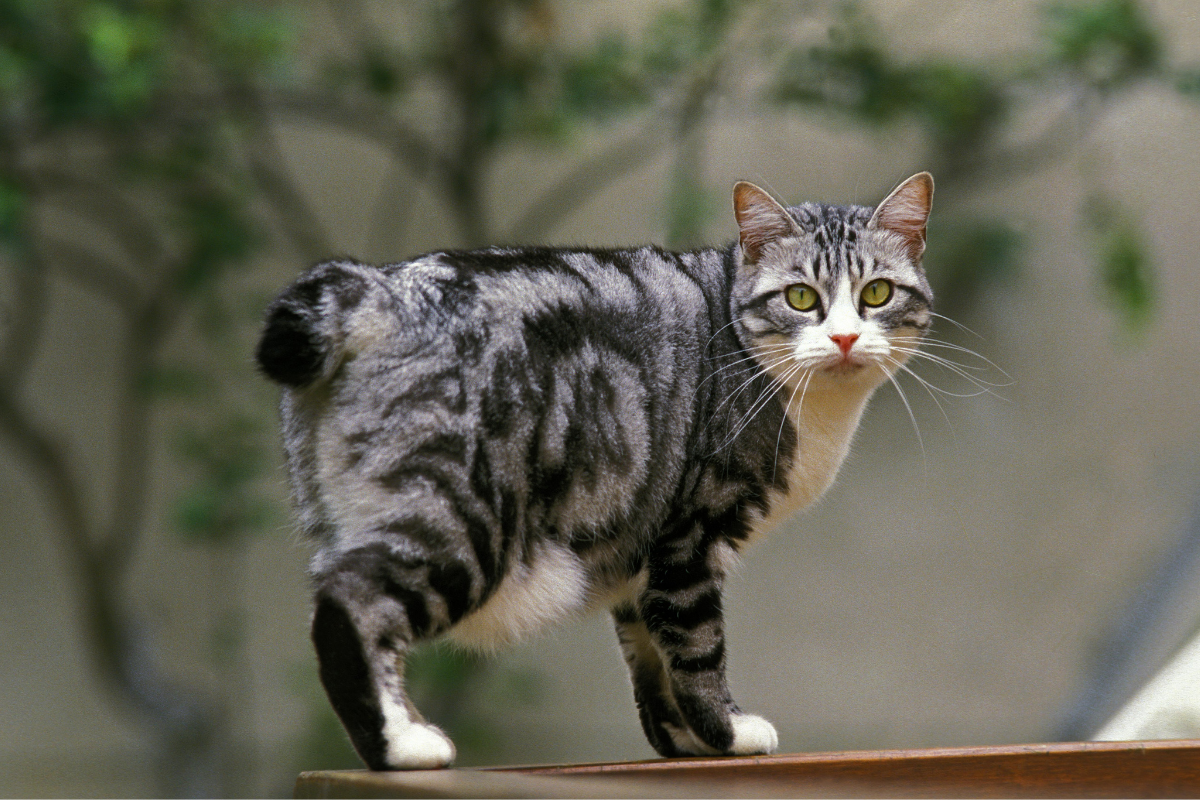 If you want to know about the Japanese Bobtail cat you’ve come to the right place. In this post you’ll discover everything you need to about about this unusual breed of cat, including appearance, personality, and any health issues.

In addition, you’ll learn about the origin of the breed, and how it developed such popularity in North America. As a matter of fact, the majority of these cats are found in the States, with only a few in the UK. So if you’re desperate to get your hands on one of these kitties and you live in Europe you’ll need a lot of patience.

History of the breed

It’s believed this unusual looking cat was given as a gift from China to the emperor of Japan over 1,000 years ago. Their excellent hunting skills made them highly popular with silkworm farmers.

In fact these cats were treated like royalty. Legend has it that this rare breed of cat will bring happiness and prosperity to those who’re lucky enough to own one.

You’ll be interested to hear, the Japanese bobtail cat was first introduced into America during the 1960s. By the mid 70s, the shorthaired variety of the breed became recognized by the Cat Fanciers association. However, it wasn’t until the 1990s that long haired Japanese bobtails achieved recognition.

If you want to show your Japanese bobtail you’ll need to adopt a kitten that has the standards required. You can find out more by contacting the Cat Fanciers association.

However, please bear in mind you should never get a certain breed of cat just for show purposes. They’re living beings and deserve to be treated as loving pets firstly and foremost.

About the Japanese bobtail cat appearance

If you’ve ever seen photos of Japanese bobtail cats you’ll know their most distinguishing feature is the cute pompom-like tail. This is the result of genetic mutation, but in no way affects the health of the cat.

There are many who disagree with the idea of breeding cats with genetic mutations. After all, if it’s not in the cat’s best interest why should deliberate breeding continue?

I personally disagree with encouraging a genetic mutation that may cause suffering. However, there are many breeders who still continue to do so.

The tail is usually about 3 inches in length, and can be kinked, curved, or set at an angle. You can always tell when a Japanese bobtail is relaxed as the tail is carried upright.

This is the same for all cats, it’s just that this breed has a very short tail. You’d also notice the hair on the tail is longer and thicker than other parts of the body. This is what gives the appearance of a pom pom.

Japanese bobtail cats can be short or long haired, but all have soft, silky coats. The most popular are tri-colored, but you can find a variety of different colors and coat patterns.

In Japan, tri-colored bobtail cats are the most popular. These cats have a mix of black, red, and white markings known as tortoiseshell. As part of their culture it’s believed these cats bring good fortune. However, tortoiseshell markings are only found in females.

The head has a triangular shape with upright ears that sit at right angles. If you look at the eyes you may mistake the Japanese bobtail for an oriental breed. This is because they appear rounded when looked at from the front.

Eye colors vary from amber, green, and gold to aqua. You can expect a Japanese bobtail cat to live anywhere from 10-15 years. As I’ve often mentioned before, life expectancy of pedigree cats tends to be lower than non-breeds or moggies.

You’ll be glad to hear the Japanese bobtail cat is a strong and healthy breed with few problems to be concerned about. Females give birth to kittens larger than the average newborn. As a result, litters tend to be smaller with 3-4 kittens being the norm.

Though no kitten is ever born without a tail, most are very short in length. In contrast to the Manx cat which has an incomplete dominant gene, Japanese bobtail cats inherit a recessive gene. This means that while this breed are always born with tails, Manx kittens can vary from having no tail, a stumpy tail, or complete tail.

In addition, Japanese bobtails don’t suffer from the same spinal problems associated with the Manx breed. In fact they’re known for their ability to jump great heights.

If you look at the legs you’ll notice the front ones are longer than the hind legs. This not only gives a muscular appearance but gives marked power when it comes to jumping.

If you want a cat you can enter in agility competitions , this is the breed for you! High stamina combined with excellent jumping skills make the Japanese bobtail an ideal candidate!

About the Japanese bobtail cat personality.

This is a highly intelligent breed of cat that’s very active. If you’re looking for a lap cat you may be better off with a Persian or Siamese. Japanese bobtails love to explore and get bored very quickly. As they’re such powerful jumpers you may want to invest in a cat tree with high perches.

Observing the outside world from the comfort of a window perch is bliss to a Japanese bobtail. Don’t be surprised if you find your cat leaping up onto tall bookshelves. You may find she spends time jumping from one high perch to another, so be mindful of breakable ornaments!

If you live alone and miss out on chats with other humans, a Japanese bobtail cat is your ideal companion! This chatty breed are very vocal and enjoy interacting with their human family.

You won’t be subject to loud, raucous noises typical of Siamese cats. Instead you’ll be spoken to softly with chirps and gentle meows.

Training a Japanese bobtail is easy as they’re so intelligent. Whether a game of fetch or playing with puzzle toys, these cats thrive on action. Teaching a cat to play fetch is something many dog owners can’t understand. However with a little patience and plenty of treats it’s very achievable.

Are Japanese bobtail cats good with children and other pets?

This is a common question asked by families looking to adopt a cat. You’ll be happy to learn though, if you have young children, this breed is the perfect choice as they get along fine with children and dogs. Their inquisitive, playful nature means they’ll probably want to join in your kid’s games!

If you already have a feline family and want to adopt a Japanese bobtail cat you should be ok. Providing you follow the rule of gradual introduction your resident felines should accept the newcomer.

Grooming your Japanese bobtail cat is easy. If you have a short haired cat, a weekly grooming session is fine. Those with longer hair should be groomed twice a week. This may include nail trimming, but always get a professional to show you how to do it properly.

Ideally, invest in a quality brush such as a slicker. In addition, a comb helps give a smooth finish.

If you intend to show your cat you’ll need to know what is required. Contact the organizers to find out before entering.

Now you know all about the Japanese bobtail cat, is this the right breed for you? If you go out during the day you’d need to provide plenty of toys to entertain. Due to the active nature of this breed boredom can be a problem if left alone.

Unless you want to come home to find your ornaments rearranged, or your papers filed in a different order, provide toys. Also, if this will be the only pet consider getting two. That way they’ll have each other for company.

Though this is a healthy breed, you’ll still need to keep up with annual vaccinations. Annual checkups are advised no matter what age your cat is. Problems caught early are far easier to treat.

As this breed is rare in certain parts of the world you may find it hard to find a local breeder. Contacting the cat fanciers association is your first move. It’s highly unlikely but not impossible to find rare breeds of cat such as the Japanese bobtail in shelters.

11 thoughts on “About The Japanese Bobtail Cat”