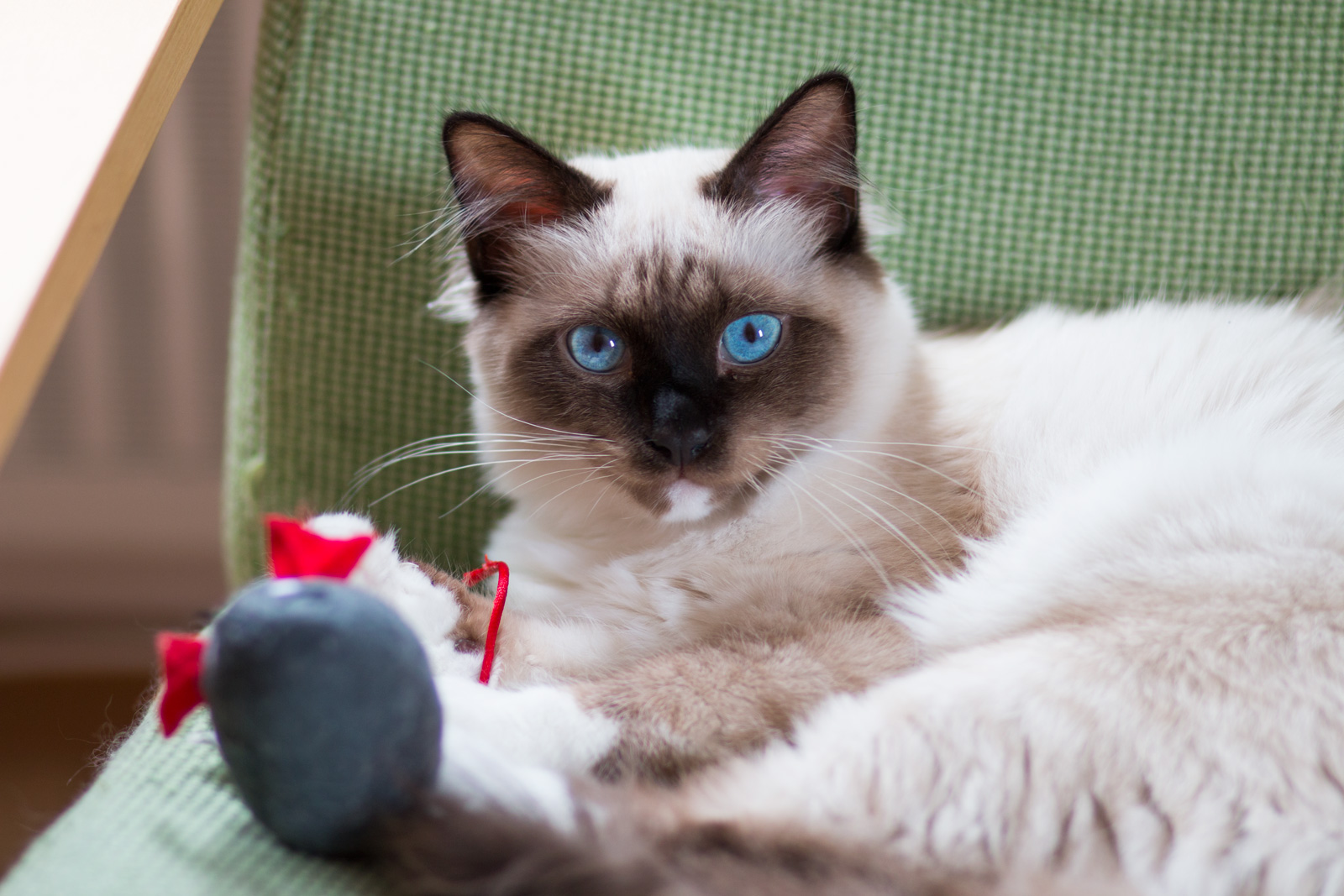 If you want to find out about the Birman cat you’ve come to the right place. I cover many cat breeds in my posts and enjoy sharing this information with like minded cat lovers.

The Birman cat is very unique and has been around for thousands of years. The origin of this breed isn’t completely known, but it’s thought to be trced back to France. There’s definitely a Persian and Siamese mix in the breed but you’ll find out more about this later.

Popular myths and a history of the breed

Known as the sacred cat there are many myths and legends surrounding this stunning feline. A popular legend has it that centuries ago in Burma, a temple was created for worshiping the gods. This temple was named Leo-Tsun, and had the most beautiful golden statues.

The story goes that during a raid by bandits, the high priest Mun-Ha suffered a heart attack, and as he lay dying his faithful white cat Sinh hissed at the thieves. Seeing the cat’s amazing and brave response, the other priests managed to chase the intruders out of the temple.

As Sinh put his paws on his masters body, the cat’s coat turned to pale gold, reflecting the statue of Tsu-Kyan, and it’s eyes became a deep sapphire blue. The natural colour of earth was reflected in the cat’s legs, head, and tail. Only it’s feet resting on his master remained white, symbolising purity.

Seven days later Sinh died carrying the high priest’s perfect soul to heaven. Amazingly, 100 other temple cats had also transformed to the same colouring as Sinh. As touching as the legend is, true origins of the Breed aren’t really known.

However, it’s believed a pair of Birmans were taken to France in 1919 for breeding, though the second World war saw a decrease in numbers. The breed became diluted with increasing numbers of Birmans being cross bred with long hair cats such as Persians. In addition they were also cross bred with Siamese, giving their distinctive point colours.

It wasn’t until the 1950s that Birman kittens were once again being produced, and in 1965 the breed was recognised in the UK. By the late 1960s Birman cats had been introduced into the USA and by this time had started to become hugely popular.

What you need to know about the Birman cat appearance

You may find it easy to confuse Birman cats with Burmese, but the breeds are completely different. Whereas Burmese cats have short coats and are of medium size, Birmans are large semi-long haired cats. The breed resembles a mix of both oriental and Persian felines.

Colour points can be found on the ears, face, tail and legs, while the body is a lighter colour. White feet give the appearance of socks and can look really cute. The front paws have socks only covering the feet, but the hind legs have socks that extend further up the leg. One of the Birman’s outstanding features are its sapphire blue eyes.

It can take up to two years for colour points to fully develop, and all kittens are born white. In addition, although the Birman closely resembles Persian cats, there is no undercoat. This means far less chance of matting.

This is good news if you hate cutting out matts from hairy kitties! It can be a real chore if your grooming schedule lapses! I speak from experience:)

If you want to know how many colourpoints Birmans can have, you’ll be pleased to know you have about 20 to choose from. Although it takes two years for a cat to fully mature you can start to see markings within 7-14 days.

Though I’m sure if you decide to adopt one of these beautiful kitties, you won’t be too fussed about point colours! Colours include lilac, chocolate, red, seal point, and cream. In addition, tortoiseshell and tabby have been introduced, as well as cinnamon, and silver.

About the Birman cat grooming needs

Although the Birman’s coat isn’t prone to matting, they still need weekly grooming sessions. The best brush is one for long haired cats, and you may want to invest in a flea comb as well. Grooming your cat helps strengthen the bond and should be part of any cat parent’s routine.

Where can you find a breeder and ho much should you expect to pay for a kitten are common questions asked by those looking for a specific breed. If you live in the UK you can expect to pay around £500 for a Birman kitten, whereas in the USA you may need to part with $700-$1,000 for your Birman kitty!

It’s always worth asking local shelters as it’s not always moggies that end up there. Ask your local vet as well. There’s always a chance she or he may know someone who’s Birman cat just produced kittens!

If you decide to look for a breeder, take your time and do your research. The Birman cat club is a good place to start, and you’ll probably find plenty of advice on adoption and caring for your cat.

If you’re looking for a cat that’s affectionate but not too demanding, the Birman is your ideal companion. Though similar to Siamese kitties in looks, they couldn’t be more different vocally. While Siamese can be noisy and very chatty, the Birman is quietly spoken. Like most cats, you’ll be reminded when it’s dinner time if you should forget, and I’m sure you’ll fall in love with her soft purrs!

Your feline companion is highly intelligent and will want to get involved with what you’re doing. Expect a cat who’ll follow you round the house and love cuddles on your lap.

The Birman’s docile nature makes this the perfect breed if you have children. They love human company and hate being left alone all day. If you are thinking about getting one of these cats, it may be a good idea to get two. This way if you are out at work during the day, they’ll have each other for company.

Any other dogs and other cats in the household should be fine as they’re known for getting on with other pets. In fact you may find your kitty joining in a game of fetch with your dog!

Their smart, intelligent nature makes it easy to to teach them how to fetch. Once your kitty understands and gets rewarded you’ll find she’ll start bringing small objects back to you. Actually, you can train most cats to fetch with a bit of patience, it’s just that some breeds are quicker to learn!

You’ll be pleased to hear Birmans are generally a healthy breed with few major problems. However, there are one or two possible health problems to be aware of. These include obesity which could become a major health risk if allowed to develop.

Excessive weight gain is something to watch for in a Birman. Their large size and heavy weight makes them prone to putting on extra pounds. In the same way as you need regular exercise and limited amounts of food, so does your cat.

Getting your cat to exercise is important not only for her health, but wellbeing as well. Another problem to be aware of is kidney disease. Though mostly associated with older cats it’s more common in Persian breeds or those descended from them.

Always ask your breeder about parentage and don’t be afraid to ask questions. You should know your kitten’s heritage before handing over any money.

Is the Birman cat the right breed for you?

Now you know about the Birman cat is this the right breed for you? As you’ve discovered, Birman kittens can be quite expensive to buy, and you’ll need to find a reputable local breeder. If you’re out at work every day and live alone, unless you get two kittens, you may find loneliness a problem.

However, if you have kids and other pets already, you may find the Birman a perfect match. Either way, if you want a loving, quiet natured pet, the Birman is certainly the right breed for you.

16 thoughts on “About The Birman Cat”