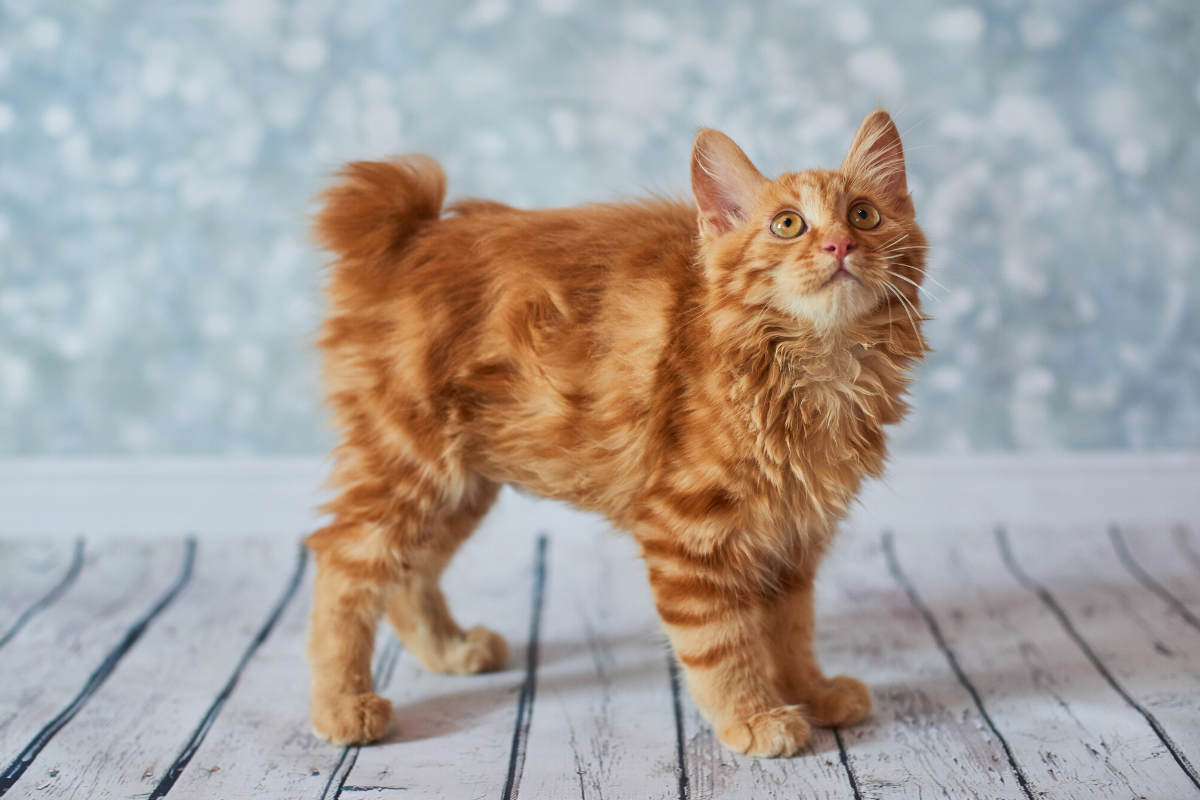 If you want to know all about the American Bobtail cat you’ve come to the right place. Whether you’re just curious, or thinking about getting one as a pet, you’ll find everything you need to know here. From the history of the breed to personality and appearance, this post will answer your questions.

History of the breed

It’s believed American bobtail cats evolved naturally as a result of a genetic mutation. Short tailed cats aren’t that uncommon, and found in countries such as Japan, Russia, and the Isle of Man.

No one really knows how these cats developed the gene for bobbed or short tails, but it’s thought to be a spontaneous occurrence in domestic cats. Bobcats native to North America, are similar in appearance to Bobtail cats, however, it’s not known if they’re closely related.

The modern day American Bobcat breed started life in the 1960s after a holidaying couple came across a short tailed cat near an Indian Reservation in Arizona. They fell in love with it and decided to adopt the cat, naming him Yodie.

Some time after arriving home they mated Yodie with a seal point Siamese. Some of the resulting kittens were born with short tails, suggesting the short tail gene was dominant.

Not all of Yodie’s descendants were healthy though, so the couple decided to use feral cats with natural bobtails for breeding instead. It wasn’t until 1989 that the American Bobtail cat was recognised by the International Cat Association and 2002 before the Cat Fanciers Association accepted the breed.

One of the things you’d notice about the American Bobtail cat is its large, muscular body. It’s very chunky looking with a shaggy coat, and wild appearance. The eyes are a beautiful almond shape, and the ears sometimes have tufts, similar to its cousin the lynx.

You’d also notice its very short tail which can range from one inch to about four inches in length. This can vary though, and it’s possible for some to have longer tails.

If you wanted to show your American Bobtail it would need to have a bobbed tail that’s no longer than the hock. As the gene is dominant, only short tailed cats can produce kittens with bobbed tails. In addition, it’s also conceivable for a litter of mostly short tailed or bob tailed kittens to have one with a full length tail.

As the American Bobtail cat has a thick undercoat its a high shedding breed, requiring regular grooming. In addition, the coat comes in both short and medium length hair. If you’re considering one of these cats as a pet you’d definitely need to invest in a slicker brush and deshedding tool.

This stunningly beautiful breed has a range of coat colours from fawn, red, black, cream, blue, and lavender, to cinammon and chocolate. Plus, the coat has a variety of patterns and shadings.

If you want a cat that’s loving and very affectionate, you’ll find the American Bobtail cat fits the bill. It takes around three years for a Bobcat to reach maturity, and they have a high intelligence. In fact this breed has been likened in nature to a dog.

You can easily train a Bobtail cat to walk on a leash, as well as play fetch. This friendly cat soon becomes part of a human family, showing true devotion. If you have children this is the perfect pet for you. The kind, gentle, loving nature of an American Bobtail makes it a wonderful playmate.

Whether you’re 24 or 84, this cat will love you and you’ll soon become inseparable buddies. Though quiet and not particularly vocal, American bobtail cats don’t like being alone. This is a breed that needs company, so if you work from home, have young children, or retired you’ll be the perfect match:)

Your feline friend will sit on your lap and watch TV with you, but won’t complain if she doesn’t like the program you’re watching! Expect a friendly greeting at the door when you arrive home, and don’t be surprised if you’re followed from room to room!

One thing to note is American bobtail cats are great escape artists, so if you’re keeping your kitty indoors, be mindful of open windows. Always keep a new cat inside for at least a month to allow time for her to adjust to her new surroundings.

You will find this breed adapts well to new environments though, and make ideal pets to travel with. If you’re on the road a lot and yearn for a cat, you’ll find the American bobtail cat will suit your lifestyle.

How much exercise does an American bobcat need?

As with all cats, it’s vital they get regular exercise. If you decide to keep your cat indoors make sure you provide plenty of entertainment:) Cat trees designed for large cats provide both exercise and a place to rest. In addition interactive cat toys such as self rotating balls, tower tracks, and robotic mice provide mental stimulation.

A bored bobtail won’t be a happy kitty, so it’s essential you keep her occupied. Puzzle feeders provide another way of making your cat use her brain. In addition, feather wands are great for bonding with your pet.

Walking your cat outside on a leash provides a way for her to exercise safely if you live near a main road. As mentioned previously, bobtail cats are easily leash trained.

If you allow your cat to wander freely outside make sure you get her microchipped. For added peace of mind, a pet tracker helps keeps tabs on your cat’s whereabouts. This can be a godsend if you’re a worrier.

Do American bobtail cats have any health issues?

As this breed has been naturally developed, it’s considered to be generally healthy. However, they are liable to develop hip problems. This is due to spine deformities which can occur in short tailed cats. Hip dysplasia though painful, can be managed successfully in many cases, giving your cat a good quality of life.

You can expect an average lifespan of between 13-15 years for a bobcat, though of course this can vary. A healthy, well cared for your cat can survive into her late teens or twenties.

As mentioned previously, this breed have dense, thick undercoats and shaggy hair. You’ll need to allow time for grooming your cat at least twice a week, especially during Spring and Autumn. It’s always a good idea to get cats used to being groomed from an early age.

Make it part of your routine just like other important weekly chores. You’ll find it great for bonding and most cats enjoy being brushed.

As I’ve mentioned before in other posts, the best way to find a reputable cat breeder is through TICA Breeders. Also, search in your area through word of mouth. Your vet may know of a good breeder, or even a local shelter.

Is this the right breed for you?

Now you know all about the American Bobtail cat you can decide if it’s the right breed for you. As it’s very friendly and sociable it’s suitable for homes with plenty of activity. This breed doesn’t like being alone, so if you’re out all day it may not be the best choice unless you get two!

10 thoughts on “About The American Bobtail Cat”