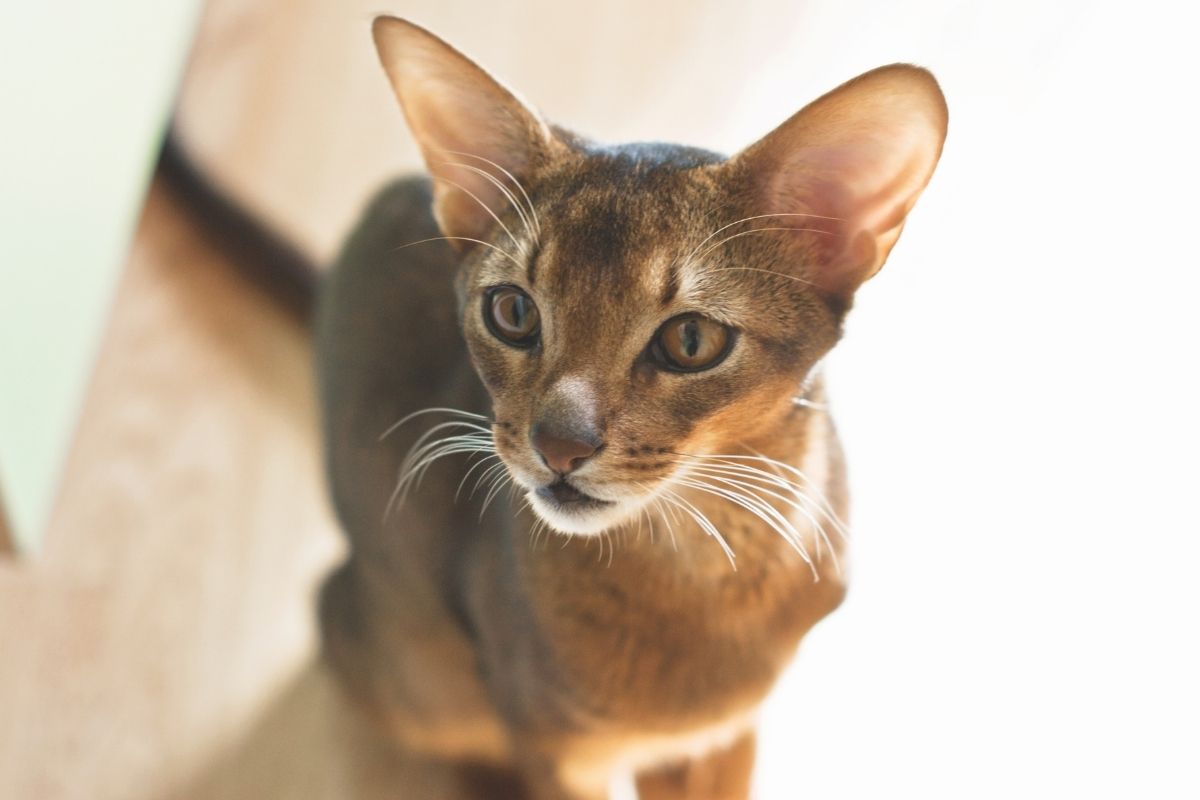 If you want to know all about the Abyssinian cat you’ve come to the right place. Whether you’re thinking of adopting one, or just curious, I hope to provide the answers you need.

You’ll discover all about the history of the Abyssinian cat and where it originated from. Plus, a look at the Abyssinian personality, and if there are any health issues.

As with adopting any breed of cat you need to think carefully about it’s needs. This is because all breeds are different.

While some revel in the company of other cats, others prefer being the only one. Also, you should take plenty of time looking for a suitable breeder.

So, without further ado, lets dive in and take a look at the Abyssinian cat…

History Of The Abyssinian Cat

Abyssinian cats are rated as being in the top five of most popular breeds. In fact, it’s believed to be one of the oldest cat breeds tracing back to The Nile

As we all know, cats were worshipped in ancient Egypt and often buried with their owners after death. Fast forward thousands of years, and similar looking cats were found in Ethiopia, formerly known as Abyssinia.

The story goes that Lord Robert Napier a diplomat, bought an Abyssinian cat back the UK in the 1860s. He was so taken with the cat’s striking looks he decided to breed him. Lord Robert named his cat Zulu, and found females with similar coat markings to cross him with.

These cats were totally unrelated but gave birth to the new Abyssinian breed. Although almost becoming extinct in Europe after two world wars, the breed fortunately survived.

You can’t mistake an Abyssinian cat with its striking looks. With a medium build long, sleek body coupled with long legs, this cat has an athletic appearance.

Weight tends to average between 8-10 ponds with males being heavier. Be mindful of your cat’s weight though.

As with all cats, overfeeding can soon result in weight gain.

Abyssinian cats have a wedge shaped head with large ears that tilt forward. This gives the cat an alert look as if always ready for action.

In addition, large, almond shaped eyes with dark outlines give the Abyssinian a fashion model appearance. You can expect this cat to have either gold or green color eyes, though many have a mix of both.

Coat colors vary from fawn to cinnamon, red, lilac, and blue. In addition, the coat is ticked with a tabby M on the forehead.

If you’re looking for a long haired Abyssinian cat you’ll be disappointed. All have short hair with an undercoat several shades lighter than the main body color.

Paw pads are usually the same color as the main body. However, if you intend to show your cat any deviation from this isn’t allowed.

About The Abyssinian Cat Personality

The Abyssinian cat has a curious nature. Though all cats are inquisitive, this breed is a true explorer.

Adopt an Abyssinian and expect to find cupboard doors open, and your kitty perched on a high shelf! These cats are great climbers so you may want to keep valuables out of kitty’s reach!

While some cat breeds prefer being the only pet, you’ll be pleased to hear the Abyssinian doesn’t. In fact, these cats welcome the company.

Whether you have another cat or dog you should be fine. However, always follow basic guidelines when introducing a new pet to your fur family

Though Abyssinian cats are highly sociable, they’re perfectly happy playing on their own. You should however spend time interacting with your cat each day.

Setting aside time for play with your Abyssinian will help you bond. You can find plenty of interactive cat toys that will both stimulate and engage.

These cats have a reputation for their funny clown like behavior. If you don’t believe cats are capable of making jokes, think again!

Abyssinians are known for daft antics like batting at nothing! They’re even reputed to almost think up jokes just like humans!

Hilarious stunts to make you laugh and grab attention are certainly antics you can expect. You can also expect your Abyssinian to get involved in everything you’re doing.

You may be wondering if Abyssinian cats are prone to health problems. Just like many other breeds though, you can expect certain health issues.

These may include a condition known as patellar luxation. In some cases it’s inherited, but can also result from trauma or injury.

The condition causes the knee cap to move out of its location. While this condition can occur in any breed of cat, it seems much more common in Abyssinians.

Another possible health problem with this breed is pyruvate kinase deficiency. This is an inherited condition typically found in both Abyssinian and Somali cats.

If untreated it can result in anaemia. The only treatment though are bone marrow transplants

You also need to be aware of a condition known as progressive retinal atrophy. Affecting light sensitive cells at the back of the eye, it can cause blindness.

It’s definitely worth talking to a breeder about any of these conditions. While they may not be that common you should be aware of them.

However, with a bit of luck and good care, a healthy Abyssinian can live up to 15 years or more. One thing to bear in mind though is they need plenty of exercise to keep in top shape.

Caring for an Abyssinian cat

As previously mentioned, Abyssinian cats are highly active cats. Their athletic build and unusually agile bodies mean they can jump higher than most other breeds.

This means, not only do you need to be careful with breakables but anything likely to cause harm. Add this to a high intelligence and only locked cupboards will keep your things kitty proof!

Though some may even go as far to say savvy Abyssinians can pick locks!

Joking aside though, an Abyssynian cat will demand a lot of your attention. This highly sociable breed shouldn’t be left alone for long periods.

If you don’t work from home or simply lack time, don’t get an Abyssinian cat unless you’re prepared to adopt two. This way they’ll have each other for company.

Before you bring your new cat home you’ll need to stock up on cat toys. These should include puzzle toys that stimulate. mentally.

Also, provide plenty of high perches for your feline friend to climb and explore. Cat trees are an excellent idea as they offer both places to explore, and cubby holes to rest.

Ideally, you’d have a large outdoor space for your Abyssinian to explore. Though bear in mind you’d also need to make it cat proof.

Allowing your cat to wander freely may not be such a good idea. Not only is this breed highly sociable but easy pickings for a thief.

A purebred Abyssinian cat could fetch anywhere between $1200-$2200. Any knowledgeable cat thief could certainly make a tidy sum.

As long as you provide your Abyssinian with plenty of indoor entertainment you should be fine. The only thing to consider is the size of your home.

Abyssinian cats thrive better in large spaces, so a small apartment wouldn’t be the best environment.

I hope this article has helped you understand a little bit about the Abyssinian cat. As you’ve discovered, this is a highly sociable and intelligent breed.

While mostly healthy there are a few inherited conditions to consider which we’ve covered. As long as you talk to your breeder before buying a kitten you should be ok.

A good breeder will be knowledgeable on any potential health problem. As I’ve mentioned before, take your time and do plenty of research before choosing a breeder.

Look for a genuine love of cats and be wary of those only in it for the money. You could even attend a few cat shows and get to know a few enthusiasts.

Wishing you a purrfect day