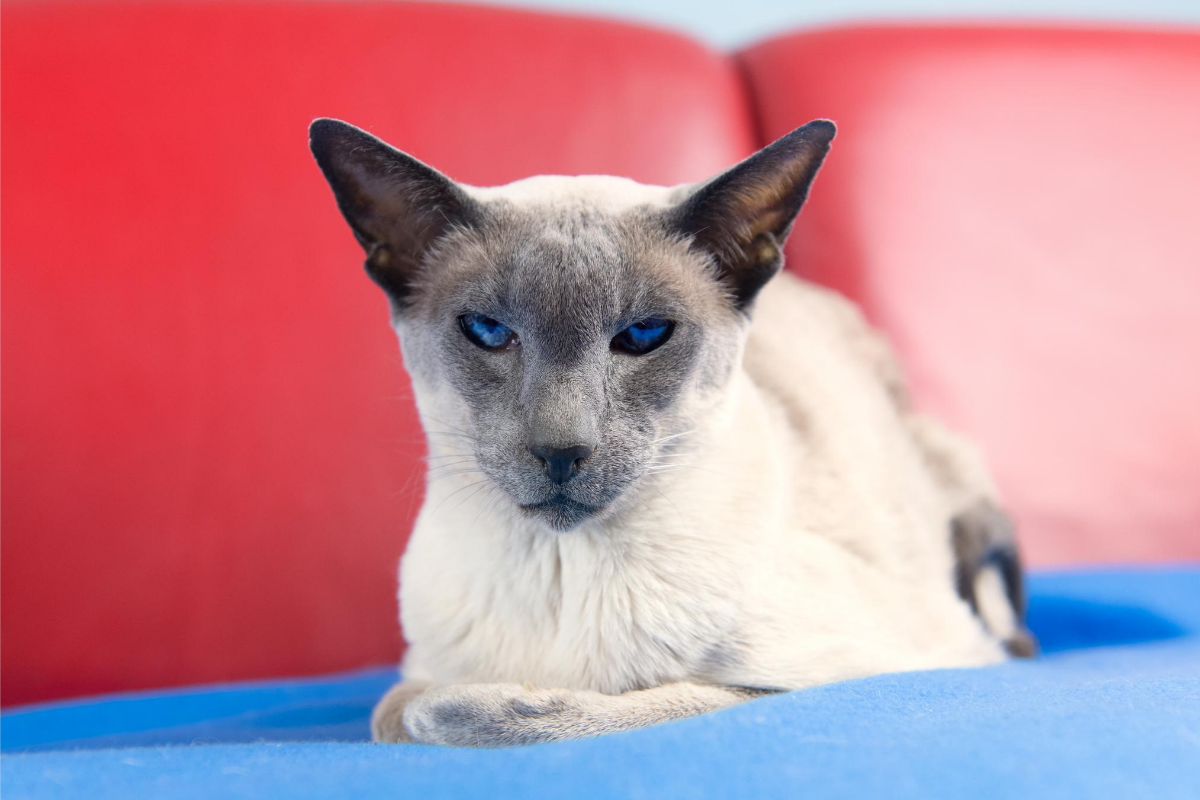 Before committing yourself, it’s important to find out about Siamese cats first. Knowing about a breed before making a decision lets you know what to expect. There are different types of Siamese cat, but they all have a very distinct appearance.

In this post you’ll discover everything you need to know about Siamese cats including where they originated from. You’ll learn about their unique dog like personality, as well as any health issues. Plus, all about color points and why they appear in the first place.

A brief history about Siamese cats

Siamese cats are thought to be one of the oldest oriental breeds and originate from Siam, now known as Thailand. Hence the name Siamese! They are a completely natural breed and the variety of point colors is a result of genetics. You could compare this to humans inheriting hair color from parents.

Ancient history shows that only royal family members were allowed to own Siamese cats as they had such a high regard. There are also many legends and folklore surrounding these beautiful cats.

One such legend suggests how they came to have crossed eyes. Apparently, a few of these sacred temple cats were ordered to guard a valuable vase. Curling their tails around it with such force caused them to go cross eyed! In addition they ended up with permanent kinks in their tails which has remained with the breed ever since!

There’s no definite date at which Siamese cats arrived in the west, but it’s believed to be somewhere in the late 1800s. A document exists that tells of a pair of Siamese cats being given to a General’s sister as a gift.

After returning to the UK she exhibited them in a show in London. However, they weren’t given a good reception, and described as being unnatural! In fact, the Siamese is the oldest known breed of cat!

Of course, these stunning and very unique cats became accepted and are now one of the most popular oriental breeds around. There are many Siamese cat breeds that have evolved over the years including Balinese.

These beautiful cats have long hair, and considered to be the only long haired Siamese. Other breed varieties include Himalayan, Bengal, Birman, Savannah, Tonkinese, and several others.

The Siamese breed has a very distinct personality that sets it apart from others. One of the things you’d soon notice is how dog like these cats are. In fact, they’re very easy to train with reward incentive tasks.

Siamese are considered to be one of the most intelligent breeds of cat, as well as being very affectionate. These cats demand affection from their pet parents, and return it in spades. Expect to be followed everywhere with little personal space! You can also expect your Siamese to be very loyal, just waiting to help!

You’ll never feel lonely with a Siamese cat and will always have a shoulder to cry on and the touch of a loving paw. This breed is very vocal and loves having conversations with their owners. You’ll always get an opinion, and your cat will always have the last word!

Siamese cats have bundles of energy and into absolutely everything. If you want to keep things private you’ll have a hard time! These curious kitties quickly learn how to open drawers and will have a good rummage through your belongings.

Coming home to find your cat has reorganized your underwear drawer may not be what you’d expect from a feline companion! This breed of cat hates being alone for long and craves company.

If you go out to work all day and leave an empty house, think twice about getting a Siamese cat. Unless you plan on getting two, or already have other pets, you’ll end up with a bored and very lonely kitty. You’ll also discover she’ll quickly find entertainment you may not approve of!

All Siamese kittens are born white and point colors don’t start developing until after the first week. In fact, it can take up to a year for points to fully develop. The reason kittens are pure white is a temperature sensitive albino gene which switches off when conditions are warm.

Though most people wouldn’t think of Siamese cats as being albino, they really are. It’s only this one gene that stops them being completely white. Added to which, there are other genes that determine the point colors.

Interestingly, experienced breeders can tell what color points kittens will develop by looking at their paw pads. In addition, some colors develop quicker than others.

For example, seal points often starts to show as a blob on the nose with the first 10 days. On the other hand, it may be up to 3 months before chocolate and lilac points begin to make an appearance.

Points always develop on extremities such as tips of ears, nose, tail, and feet. This is because these are areas of the body that are cooler in temperature. Have you ever noticed how your hands and feet can be cold, yet the rest of your body is warm? Well the same applies to animals:)

How many color points are there?

If you’re thinking about getting a Siamese cat there are 32 varieties of color. However, if you plan on showing your cat you’d need to check which colors are accepted. This is because different countries have their own regulations.

The most widely found point colors are lilac, chocolate, blue, cream, cinnamon, and red. In addition, you can also find tabby, tortie, and caramel.

Though some Siamese cats have very dark points, black doesn’t exist. As mentioned previously, all Siamese are basically albino cats with a temperature sensitive gene.

You can’t mistake a Siamese cat by it’s long, elegant body and long legs. In addition, a graceful long neck adds to its super model looks:) The original round shaped head or Applehead as it’s known dates back to the 1950s. These are still around today and their beautiful blue slanting eyes stand out against darker point colors on the face.

Wedge head Siamese are now considered the standard for showing. These stunning cats have very muscular, lean bodies, and the eyes are even more slanted than the Applehead. However, there are concerns that Wedge head Siamese are prone to respiratory problems due to their narrow shaped faces.

Caring for your Siamese cat

Even though Siamese have short coats they still require regular grooming. A soft bristle brush is best as pin brushes can easily scratch delicate skin. Slicker brushes are a good choice as it promotes good circulation without scratching. In addition, a retractable head makes it easy for cleaning.

It’s a good idea to brush your cat about once a week, and maybe more during Spring and Autumn. This is when shedding occurs, and even your sleek Siamese will shed some hair.

As there is very little undercoat Siamese cats feel the cold more easily than other breeds. This is something you should be aware of in colder months.

It may be worth noting that if you have an allergy to cats it’s the dander and not length of hair you should be concerned with. However, as these cats don’t shed a lot of hair, they are considered much easier to live with for people with allergies.

Brushing your cat regularly not only helps keep her coat nice and shiny, but loosens dander as well. In addition, vacuuming floors and furniture will help cut down on allergens.

Some breeds of cat have lower levels of a protein known as FD1 and considered hypoallergenic. These include The Balinese, a close relation to the Siamese, Burmese, and the Russian Blue.

FD1 is what triggers allergic reactions and commonly found in dander. So as long as you remember to brush your Siamese cat you will lessen the problem.

Siamese cats are basically a healthy breed, though there are some potential problems you should be aware of. These include crossed eyes as previously mentioned, and glaucoma.

In addition, asthma and chronic bronchial disease may also occur. Heart problems are another possible issue, but don’t let any of these put you off as they can all be managed successfully.

Crossed eyes are actually caused by a condition known as Strabismus. It’s very common in traditional Siamese cats or Apple heads, and causes the eyes to misalign. As a result, affected cats have to cross their eyes to see straight.

Fortunately, it can be treated by surgery, and is not so commonly found in Wedge head Siamese. Many breeders have been working to eliminate crossed eyes, however, there’s still a chance kittens can be born with their eyes crossed.

Cats just like humans can suffer from glaucoma, and certain breeds such as Siamese are more susceptible. However, it can be successfully treated with eye drops or surgery. It’s always best to get your cat seen by a vet as soon as possible if you notice symptoms to avoid blindness.

Chronic bronchial disease or CBD can occur in felines just as it can in people, and found more commonly in Siamese. It can manifest either as asthma or bronchitis but is treatable with medication.

Young to middle aged cats are more at risk. Additionally, Siamese cats are prone to a form of heart disease known as hypertrophic cardiomyopathy.

If left untreated it can cause heart failure but is treatable with medication. However, if your kitty is diagnosed with this condition she’ll need to be on it for life. It’s always a good idea to take out pet insurance as soon as you adopt a cat, so any unexpected illnesses are covered.

Owning a beautiful Siamese can make you want to show her off to fellow cat enthusiasts. However, most Siamese cat shows only recognise the modern wedge shaped head and not the traditional Appleheads. This is something to bear in mind before getting a Siamese if you want to enter shows.

Careful preparation is essential including brushing, cleaning ears and trimming claws if needed. Think of a cat show as a beauty contest with points being lost for every flaw.

You can find out more about showing your cat by contacting the Cat Fanciers Association, or find local cat clubs. It can be a great way to meet other like minded people and make new friends. You’ll always have something in common and able to share stories of your precious fur babies!

Are Siamese the right breed for you?

Now you know a bit more about Siamese cats, are they the right breed to suit your lifestyle? If you’re out all day and have a very busy life they may not be the best choice. However, if you have another person at home or other pets you should be ok. Getting two cats is often a good idea as they’ll always have each other for company.

Remember, these are highly intelligent cats with lots of energy and easily bored. Plus, they crave company and don’t do well on their own. Siamese cats need plenty of mental stimulation otherwise they soon make mischief.

You must take this into consideration and be able to provide plenty of space for running and jumping. In addition, this may not be the right breed for you if you want a nice quiet kitty! Siamese cats are very vocal and like to make conversations with their owners!

One thing to remember about Siamese cats is their dog-like personality. In fact, adopting one would be more like sharing your home with a dog than a cat!

10 thoughts on “About Siamese Cats”