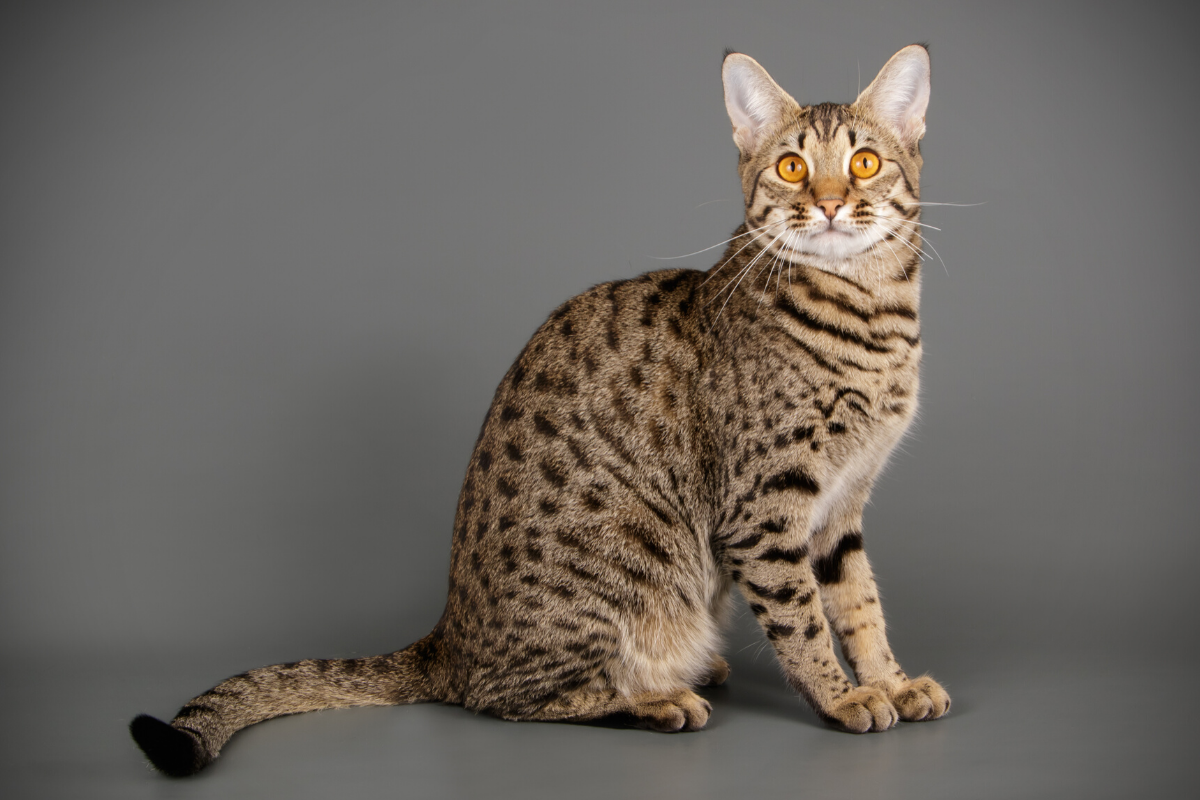 In this article you’ll discover all about Savannah cats and if they’re the right breed for you. You’ll also find out if Savannah cats are legal to keep, and if you need a licence to own one. In addition you’ll also discover about the personality traits and any health issues of these beautiful creatures.

What is a Savannah cat?

A Savannah cat is a cross between a wild African cat, and a domestic cat. Their rarity and price depends on parentage.

F4 and F5 Savannnah cats are much closer to a normal domestic cat though they have wildcat markings. These are a large breed cat with very long legs and easily mistaken for their big cousin the cheetah!

In fact there was report of an incidence on the BBC news recently when a savannah cat had Escaped from the owners home. Firearms officers and an animal expert were called out after members of the public thought they’d seen a dangerous big cat on the loose!

If you’re thinking of getting a Savannah cat you may be wondering if they’re legal to own. Here in the UK you’re allowed to own one providing it’s not an F1 or first generation Serval, and you don’t need a license. In America it seems to vary depending in which state you live in.

Some allow all generations, whereas others have strict rules on only allowing F4 generations and higher. Each country has their own rules and regulations and you’d need to study them very carefully before making any decisions.

How did the breed start?

In 1986 a wild African cat mated with a domestic cat and the offspring named Savannah. Word quickly around and breeders were soon showing interest. A new breed had been created and would be named after the first kitten. Some of the breeds used in developing the Savannah cat include Bengals, oriental shorthairs, and Egyptian Maus.

Over the following decades the breed has continued to evolve, but expect to pay a high price for a kitten. As they’re so difficult to breed you could be paying anything up to $20,000. It’s believed there were only a few successful breeders worldwide but this is changing.

The Savannah cat is the largest breed of domestic cat in the world. With it’s long legs this cat can easily be mistaken for a cheetah or other big cat. Coat colours vary, and can be anything from light tan to dark brown. In addition you may also find silver, blue, lilac, or even grey. The coat is covered with large dark spots that resemble that of it’s wild ancestor the Serval.

Coat patterns can also vary just as with colours. Although the standard is large spots, you may also find Savannah cats with marble patterned coats. In addition the spots themselves can vary in shape and regularity of spacing.

The ears of a Savannah are very large and stand tall. They’re deeply cupped and able to rotate 180 degrees. This gives them a huge advantage when it comes to hunting as they can easily hone in on prey just like using radar! Also, one feature you may find interesting are “ocelli” marks at the back of the ears. These resemble the eyes of predators and serve to scare them off! Other creatures including butterflies also have them.

The eyes of a Savannah cat are slightly hooded with black tear marks running down the side of the nose. These help reflect light during hunting sessions and inherited from the African wildcat. Eye colour can vary depending on genes, but if you want to show your Savannah, any colour is allowed.

These are high energy cats always looking for ways to amuse themselves. If you can’t provide entertainment they’ll make their own! Leave a Savannah to her own devices and expect to return home to chaos! If you’re looking for a highly sociable cat who loves joining in family fun, this may be your breed. They generally get on well with other cats and dogs, but be careful with small pets such as hamsters.

You’ll soon notice these cats make very peculiar noises including hissing. This is no ordinary kitty hiss, but known as the snake hiss. It goes back to their Serval ancestors who use it to scare off predators.

Purring is one of the most comforting sounds you can get from owning a cat, and you’ll be pleased to hear Savannah cats purr just like any other domestic kitty. Anticipating food or being petted are enough to make your Savannah purr with pleasure!

Don’t be surprised if your kitty follows you everywhere! In many respects Savannah cats are quite dog like, and you’d be forgiven for thinking they’re easy to train. While just like any other kitty they are trainable, don’t expect your Savannah to start chasing sticks over fields anytime soon:)

However, having said that, you could probably teach your cat simple commands such as fetching a favourite toy. Most cats enjoy puzzle games to stimulate and exercise. I’m not talking about jigsaws ha ha, but food puzzles!

How much exercise does this breed require?

As Savannah cats are high energy they need plenty of exercise. Preferably your cat should be allowed the freedom of going outside, but if this isn’t practical you must provide plenty of indoor activities.

Cat towers, large scratching posts and plenty of toys will help keep your kitty entertained. If you have outdoor space but you feel it’s unsafe for your cat, consider building a catio or installing cat proof fencing.

Remember, the further away from a Serval cat in terms of parentage, the more domesticated it will be. Allowing an F1 Savannah cat to freely roam your neighbourhood would be irresponsible. However, an F5 or F8 would be fine in most cases. Though, as previously mentioned always check your country or state’s rules and regulations.

In addition, if you’ve paid out over $15,000 for a cat be aware that other’s may know of it’s value as well! Make sure your cat is microchipped, and even consider fitting a tracking device. This could save a lot of worry and heart ache should your cat go missing.

Though few breeds of cat apart from the Turkish Van like water, you’ll be surprised to learn that Savannah cats do, and enjoy splashing around. You’ll find it very easy to bath your cat in fact don’t be surprised if she tries to join you in the shower!

Be very mindful of places in the home where water is present though such as toilets. These cats learn fast! Always keep the toilet seat down and never leave washing up water in the sink.

Just like young children, cats are vulnerable around water. Your Savannah kitty may well decide to take a dip in the swimming pool or garden pond if it’s uncovered. As a result, she could run into difficulties such as being able to get out safely. I’d highly recommend buying netting to cover the pool when not in use, and the same for a pond.

What do Savannah cats eat?

Despite their size, the amount of food your Savannah cat would eat is not much different from that of a normal domestic cat. Whether your kitty has a filial number of F5 or F8 she’ll still retain some of her Serval cat ancestry.

This means her digestive system won’t be quite the same as your average moggy, and she may not be able to metabolise certain nutrients as effectively. In the wild, Serval cats feed on small rodents, and while you won’t be expected to provide a selection of mice, you can adapt your cat’s diet.

Avoid cheap food as much of it is bulked out with fillers such as corn which isn’t easily digested by a Savannah. Instead, opt for high quality cat food that’s rich in protein. One way of ensuring your cat gets her daily requirement of nutrients is to make your own food. While making your own cat food may seem difficult and time consuming it doesn’t have to be.

However, if home cooking doesn’t appeal to you there are some excellent foods on the market that contain all the nutrition your cat needs. These include Blue Buffalo Wilderness, a high protein, grain free food. They claim their exclusive lifesource bits ensure healthy muscle development and help maintain healthy body weight.

Your Savannah cat’s wild ancestors would eat between 15-20 small meals every day. This is because that’s roughly the number of hunts a cat would complete each day. In fact Serval cats are known as Africa’s most successful hunting cat!

In order to maintain this wild ancestry feeding schedule as much as possible it’s suggested you give your cat lots of small meals. Doing this will help maintain high levels of energy throughout the day, and a healthy metabolism.

Do Savannah cats have any health issues?

Fortunately, Savannah cats are a very healthy breed with no particular health issues. However, they’re still just as much at risk of disease as any other cat. The only thing you need to watch out for is lack of taurine in your cat’s food. However, as long as you make sure she has a high protein diet as mentioned previously, there shouldn’t be a problem.

So is a Savannah cat the right breed for you?

Now you know a little bit about Savannah cats you should have a good idea if this breed is suitable for your lifestyle. If you want a low energy kitty who sleeps most of the day and enjoys a cuddle on your lap then don’t get a Savannah! On the other hand if you want a lively, energetic cat who follows you everywhere, then this may be your ideal feline companion!

Before you even consider buying a Savannah kitty, do plenty of research. Work out your finances and the amount of money you can afford to spend. Remember, the higher the filial number the less Serval your kitty will have, and this means a lower price for you. Be very mindful of breeders willing to take advantage of a cat lover. Know exactly what you’re dealing with and get expert advice first.

In addition, stay away from any offers of cheap Savannah kittens. These are living, breathing souls, not possessions. You’re not buying a car or piece of art. You’re buying a gentle living creature who could be a part of your life for the next decade or two.

6 thoughts on “About Savannah Cats”